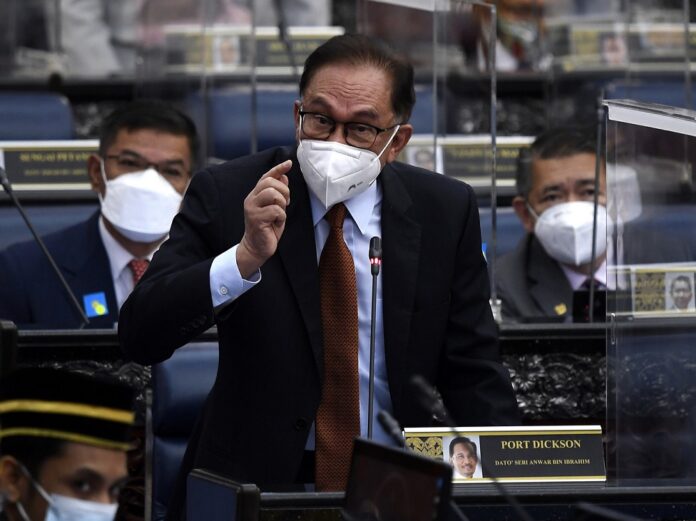 Anwar, at the start of the ministerial winding-up session, stood up and proposed a debate on the matter, telling Azhar that he had already submitted a motion on October 8, under Standing Order 18 (1).

He described the issue as “critical”, adding that “nations which are more responsible” had already announced investigations into the billions in funds stashed in offshore accounts by the world’s elite.

“This, I feel, must be debated here. We do not want to punish anyone. We do not intend to punish those mentioned. They can offer their explanations. But if hundreds of millions of ringgit are hidden in accounts in offshore companies, and we do not give the space to those mentioned or the government to probe them, this country will fail.

“And I ask the prime minister, who wants to preserve political stability, who wants to preserve transparency, who wants to guarantee the economic sustainability of the nation, how can we remain silent when hundreds of billions of ringgit are brought out of the country undetected and illegally from our country? This involves many names,” he said, adding that he is not just referring to those linked to the current government but also from Pakatan Harapan (PH).

The Port Dickson MP lamented that if so much money is hidden in tax havens and the government does nothing, it would be an embarrassment to MPs, while also calling for bipartisan efforts to address the issue.

He said that he is willing to risk losing his political popularity among influential figures and donors, in demanding that the issue is addressed in Parliament.

Azhar, in rejecting the motion, mentioned that it must satisfy three criteria: that it is of public importance, urgent and on a specific topic.

He then proposed that the matter be brought to the Parliamentary Select Committee (PSC) or even a Royal Commission of Inquiry (RCI).

“Another way, in my view, is we have nine PSCs now, and one is on the economy, which covers the Ministry of Finance. I feel it is more apt if this matter is brought to that PSC and other related PSCs for an in-depth look, and over a longer period, than this Lower House.

“So according to 23 (1) (i), Opposition Leader, a query that is asked by an MP cannot be posed on whether what was reported in the newspapers is true or not. If I read this together with 18(7)(C), which is another Standing Order limitation that I have. I admit this matter is important, but I am limited by the Standing Orders,” he said, suggesting to Anwar that he use other avenues available to pursue his matter.