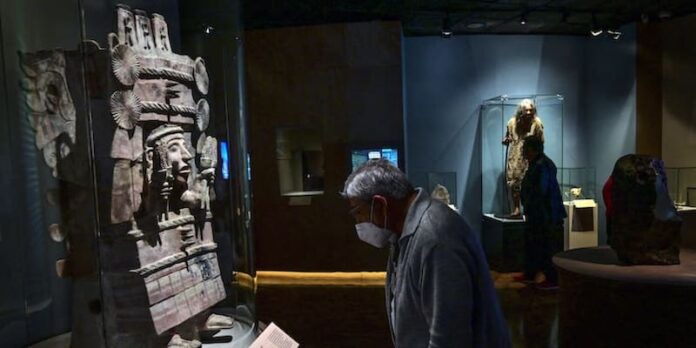 A man looks at the work titled ‘Chicomecoatl’, of the Mexica culture, during the ‘The Greatness of Mexico’ exhibition. — AFP pic

MEXICO CITY, Oct 10 — Ancient Mexican artefacts recovered from abroad are among the archaeological treasures on display at an exhibition showcasing the country’s cultural heritage 200 years after it won independence from Spain.

Titled “The Greatness of Mexico,” the exhibition at the National Museum of Anthropology and another site showcases 1,500 rare pieces, including Mayan sculptures and Aztec codices.

Almost half of them are on display in Mexico for the first time, having been loaned or returned by European countries or collectors.

The exhibition demonstrates “who we Mexicans are,” said Yectli Hernandez, a Mexico City resident who came to the exhibit.

Hernandez said she was proud of her given name’s indigenous roots, as well as her Spanish surname — a reflection of Mexico’s diversity.

“I’m as proud to enter a cathedral as I am to visit pyramids,” Hernandez said.

The exhibition illustrates that “the history of this country did not begin just 500 years ago,” said Culture Minister Alejandra Frausto Guerrero.

She was referring to the fall of the Aztec empire to Spanish conquistadors in the 16th century.

President Andres Manuel Lopez Obrador’s government says that it has recovered more than 5,700 artefacts from foreign countries since late 2018.

Italian general Roberto Riccardi was recently awarded the Aztec Eagle, the highest distinction granted to a foreigner in Mexico, for his work in the recovery of archaeological pieces.

Just last month, Riccardi helped recover more than a dozen items that were due to be auctioned off in Italy.

“The sale of these objects constitutes an offense in the eyes of Mexican law,” the culture minister said.

Every time there is an auction of Mexican artefacts, the government asks that they be seized and returned, said Bernard Tallet, outgoing director of France’s Center for Studies on Mexico and Central America.

“Mexico says that its works have been stolen from it,” some during the colonization era and others during the 19th century, Tallet said.

Like many Mexicans, Hernandez, the museum visitor, hopes more artefacts will be returned.

“The truth is that they belong to us,” she said. — AFP