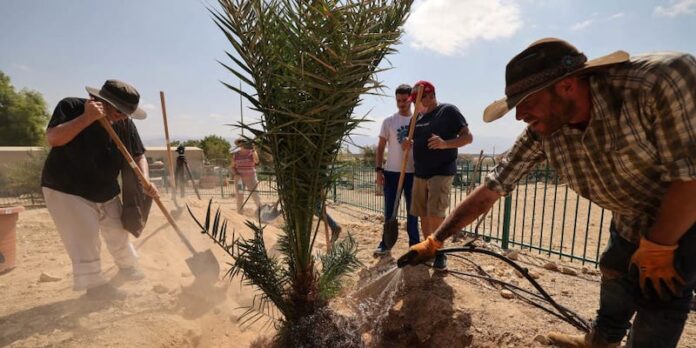 KIBBUTZ KETURA, Oct 11 — When Sarah Sallon first thought of cultivating 2,000-year-old date palm seeds from a Roman-era fortress towering above the Dead Sea, she received a less than encouraging response.

But Sallon’s bet that the Dead Sea’s unique, bone-dry environment could enable the seeds from the Masada fortress to flourish has been proven right.

With lots of patience and care, she and project partner Elaine Solowey managed to grow date palms from seeds dating back to the Kingdom of Judah which emerged in the 11th century BC.

The kingdom was “renowned for the quality and quantity of its dates”, praised at the time for their “large size, sweet taste… and medicinal properties,” the two wrote in an article for Science magazine.

Bringing back the ancient variety with Solowey, a specialist in sustainable agriculture, was not just a novelty project, Sallon said, but offered “a beacon of hope” for a planet battling the climate crisis and mass species extinction.

“Perhaps these amazing species that are everywhere around us will not disappear,” she said, suggesting that “nature has tricks up its sleeves.

“It can let its seeds stay dormant for thousands of years, and we think it’s gone extinct, and — boom! — it takes a pair of golden hands, like Elaine’s, to bring it back to life.”

‘A lot of hassling’

Before embarking on her date palm revival, Sallon had read about 500-year-old lotus flower seeds that had germinated.

In 2004, she asked Israel’s Bar Ilan University for access to a few of its preserved date palm seeds found in 1960 under debris at Masada, the Herodian-era mountain-top Jewish encampment famous for having been besieged by Roman forces in the first century.

Undeterred after being called “mad” by botanical archaeologists at Bar Ilan, Sallon showed them evidence of ancient seeds being germinated elsewhere.

With that and “a lot of hassling”, she obtained five seeds and then approached Solowey, based on Kibbutz Ketura, near Israel’s border with Jordan.

Solowey recounted how Sallon sent her the ancient seeds from the fortress with the instruction to “try to sprout them”.

Solowey said she spent several months considering the best approach, before deciding to use an enzyme-based fertiliser while ruling out the use of any man-made chemicals.

In her greenhouse, where she grows many dozens of plants, she tried to sprout three of the seeds, but for weeks saw no signs of life.

Then, one day in March 2005, small cracks opened in the earth of one of the date palm pots, a sign that roots were beginning to take hold.

“I began to think, wow, if this is what I think it is, I’d better start being a lot nicer to it,” Solowey quipped.

“I didn’t realise the significance that (the plant) had.”

Out of the three seeds planted, just one thrived, acquiring the nickname “Methuselah” after the biblical figure known for his longevity.

But “Methuselah” was a male plant and therefore bore no fruit.

Having proven that cultivation can work, Sallon went in search of more seeds in hopes of sprouting a female plant.

Then last year, after a long wait, a date palm named “Hannah” produced about 100 dates.

An even more bountiful harvest followed this August: 800 light brown dates, slightly dry but with a delicate honey flavour.

Samples will be available for sale soon, the team promises.

There is also hope that Hannah’s sister “Judith”, planted this month, will produce more dates.

It’s a fickle process. When it works, she said, “you get these… magnificent dates”. But when there is “a gap in this continuity, the whole thing falls apart”. — AFP