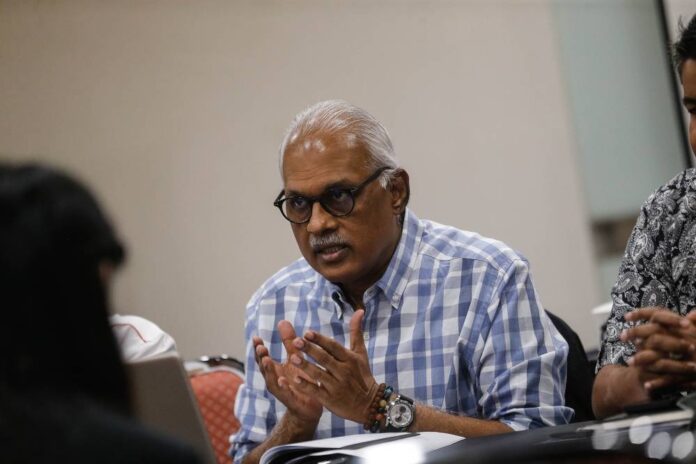 Klang MP Charles Santiago speaks at a press conference after a roundtable discussion on price increases and its impact on the rakyat in Petaling Jaya, August 17, 2022. — Picture by Sayuti Zainudin

PETALING JAYA, Aug 17 — The government’s ban on chicken exports is a key example of its lack of planning and rethinking of business models, which is leading to food insecurity and inflation, said Klang MP Charles Santiago.

Charles said that the knee-jerk ban was a “disaster” that has resulted in Singapore making deals with Thailand and Indonesia to ensure the island nation’s own chicken supply.

“We will lose the (Singapore) market,” Charles said, during a press conference after holding a roundtable session with various experts regarding rising prices in Malaysia, at Armada Hotel here today.

Charles said prices of food were not increasing merely because of international problems such as global supply chain disruptions and the war in Ukraine, but largely due to internal weaknesses such as labour shortages and lack of support for farmers as well as other small and medium enterprises.

The Ministry of Agriculture and Food Industries (Mafi) on June 1 banned all chicken exports in a bid to stabilise local supply and keep soaring chicken prices down.

The move came after months of ceiling prices placed on chicken, which had caused ire among poultry farmers who said they were being choked by increased prices of chicken feed and labour shortages.

The ban was partially lifted in mid-June, allowing Singapore to import live free range and black chickens, but not highly demanded broiler chickens.

Datuk Rais Hussin Mohamed Ariff, who was also at the event, provided another example, saying that Malaysia has one of the lowest percentages of arable land at some two per cent of all land available in the country, despite having a large amount of fertile land.

The president and chief executive officer of think tank Emir Research, specified that arable land is land cultivated specifically for growing food and should not be confused with land used to grow cash crops such as oil palms.

“In Malaysia there is so much unused land. I’ll give you just one example. In Perak there are almost 2,000 hectares of land under wakaf. And every state has wakaf land including Selangor.

“But this information of wakaf land is very confidential, god knows why. But this land should be made available,” said Rais, who is also a Bersatu supreme council member.

To note, Wakaf land is land donated by a Muslim, which is placed under the corresponding state’s Islamic Religous Council, to be used for religious, educational or charitable causes such as building mosques and schools.

“But in certain places there are more mosques than there are people praying. So you don’t have to build a mosque.

“Currently the land is not being utilised, it is left idle. And this is just talking about the wakaf land, there are many other types of land that is being left idle,” he said.

Rais said that utilising such unused lands for farming food would lead to less dependence on exports and increase food security.