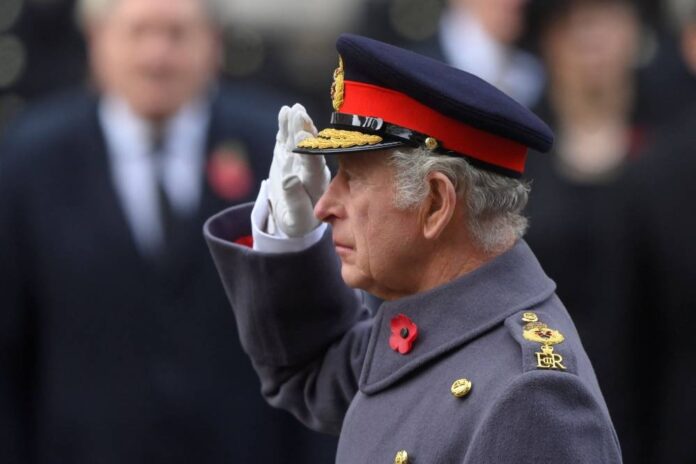 Britain’s King Charles attends the Remembrance Sunday ceremony at the Cenotaph on Whitehall in London, Britain, November 13, 2022. — Pool via Reuters

Charles, who became King following the death of Queen Elizabeth in September, was joined by other senior members of the royal family including his son and heir Prince William. His wife and queen consort, Camilla, watched from the balcony of a nearby government building.

Chief of the Defence Staff Tony Radakin said the ceremony to honour Britain’s war dead had an “additional poignancy” after the loss of the queen.

“She represented duty and service, but also that dignity of that wartime generation and all that they sacrificed for our freedom,” he told the BBC.

Prime Minister Rishi Sunak, leaders of opposition political parties, senior ministers, and faith representatives also laid wreaths during the ceremony on Whitehall in central London, which was lined by thousands of members of the public.

The ceremony, also attended by seven former prime ministers, is due to be followed by a march past which will involve around 10,000 Royal British Legion veterans, representing 300 different armed forces and civilian organisations.

Buckingham Palace said the design of the King’s wreath paid tribute to the wreath of his grandfather King George and his mother Elizabeth, with poppies mounted on an arrangement of black leaves and a ribbon bearing Charles’s racing colours of scarlet, purple and gold.

The chimes marking the start of the two minute silence at 1100 GMT saw the permanent reconnection of the Big Ben bell in parliament’s Elizabeth Tower, after it was largely silenced for a five year conservation programme in 2017. — Reuters