HomeNationalKelantan firemen to put on PPE when dealing with Covid-19 flood victims,...
National

Kelantan firemen to put on PPE when dealing with Covid-19 flood victims, says its director 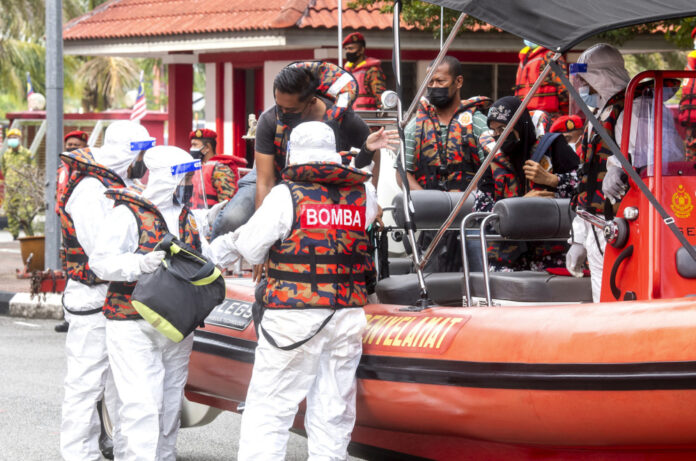 Kelantan Fire and Rescue Department personnel hold a demonstration on the Preparedness Programme for North-east Monsoon at the department’s headquarters in Kota Baru, October 14, 2021. — Bernama pic

KOTA BARU, Oct 14 — The Kelantan Fire and Rescue Department (JBPM) will be using special boats and personal protection equipment (PPE) for the rescue operations of flood victims who are confirmed Covid-19 patients.

Its director, Zainal Madasin, said the specialised clothing called “tyvex” and the special boats are some of the improvements made to the standard operating procedure (SOP) in preparation for the coming North-east monsoon season in the state in view of the prevailing Covid-19 pandemic.

“At the moment, we are upgrading our workflow to deal with the Kelantan monsoon season which is expected to occur in November and our preparation is different for this monsoon season because we will be saving lives and at the same time deal with Covid-19 pandemic.

“The clothing and boats are for the safety of our personnel and flood victims who infected with Covid-19,” he told reporters after inspecting Kelantan JBPM’s Preparedness Programme for North-east Monsoon at the department’s headquarters here today.

Elaborating further, he said JBPM also held discussions with the agencies involved in dealing with the floods like separating flood victims who are also Covid-19 positive from other victims to curb the spread of the pandemic.

“Before we begin with our rescue operation, we will first gather information from the Health Ministry (MOH) to ensure the victims are Covid-19 positive or not,” he said.

“With the interstate travel now relaxed, it will have an effect on us to carry out our rescue mission because Kelantan is expected to see an influx of people coming to the state.

“Aside from the SOP which we drew up ourselves, we also follow the SOP outlined by the National Security Council (MKN) and MOH earlier,” he said.

He also said a total of 1,245 Kelantan JBPM personnel, 57 boats, 11 lorries, 37 four-wheel drives, and 811 safety jackets are provided to face this year’s monsoon season in the state. — Bernama