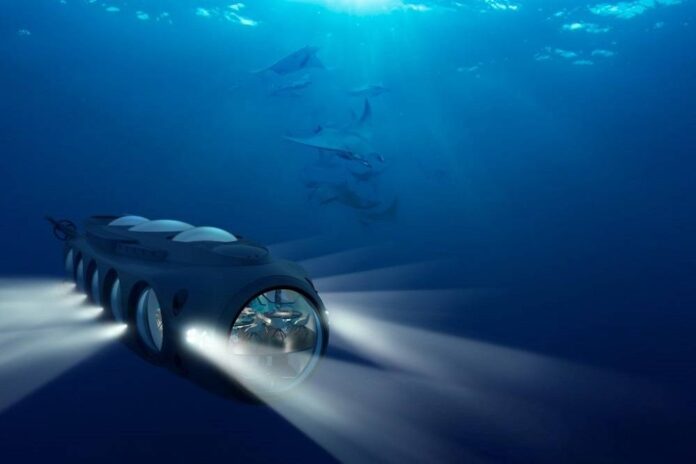 AMSTERDAM, May 21 – Could the ultimate dining experience one day be sitting down to a meal in close quarters with underwater marine life? A manufacturer of submersible vehicles plans to push back the limits of the restaurant experience with its new class of entertainment submarines, capable of reaching depths of 200 meters.

From menus to tables and a bar, there’s everything you’d usually expect to find in a restaurant, except that here, the room is submerged 200 meters underwater. Dining in a submarine promises to be a surprising new experience – one that claustrophobic foodies might want to avoid – thanks to an unusual project from the Dutch company, U-Boat Worx.

The firm, which develops underwater vehicles for scientific or tourism-related applications, has designed a 150-square-meter underwater entertainment platform, which can be configured for private events such as weddings or seminars, and which can accommodate up to 120 guests, not including staff. The vessel is even equipped with a sundeck, allowing guests to step out above water to admire the view before dessert.

This submarine entertainment platform is capable of staying underwater for 18 hours, which would allow trips combining snorkeling sessions and meals, for example, in order to explore the depths of a particular maritime area. For the moment, no launch date has been specified by U-Boat Worx. But with this project – as surprising as it is unusual – there are all kinds of possibilities for dining and more! Above all, it further fuels the concept of the immersive gastronomic experience. And we’re not talking about experiences that are supposed to heighten our senses with the help of giant screens and three-dimensional sounds, like the Under the Sea restaurant by the Ephemera collective, which opened in March in Paris. Instead, it’s about dining in contact with nature – in this case the sea – in unusual and exceptional venues.

In 2019, the Sn?hetta architecture studio unveiled Europe’s first underwater restaurant, built in the very south of Norway. Sunken underwater up to five meters deep, the rectangular building appears as if marooned in the North Sea. But there’s no need for a wetsuit to observe the marine fauna as you take a seat at this restaurant called Under. And don’t mistake this for a tourist attraction or a gimmick. The Michelin Guide awarded a star to the gastronomic creations of the chef Nicolai Ellitsgaard and his team, themed on products from the sea fished locally. Perhaps it won’t be long before restaurant booking sites start adding an “underwater” category… – ETX Studio

Mixed fortunes of celebrities who leapt on NFT craze