IS fighters massing in Afghanistan, says Putin ahead of talks 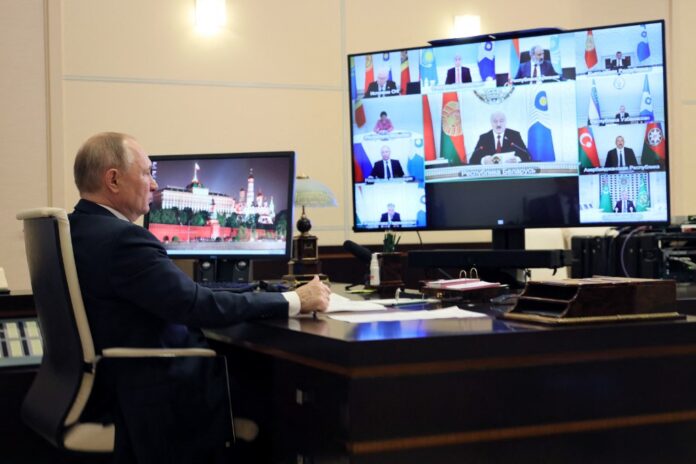 Russian President Vladimir Putin attends a meeting with heads of the Commonwealth of Independent States via video conference call, at the Novo-Ogarevo state residence, outside Moscow, on October 15, 2021. — AFP pic

The United States, China and Pakistan will join talks on the Taliban takeover on Tuesday, the Kremlin’s envoy to Afghanistan said.

A day later, the Taliban and other regional players will talk to Russian officials on how to rally international assistance to stave off a humanitarian crisis.

“According to our intelligence, the number of (IS) members alone in northern Afghanistan is about 2,000 people,” Putin said during a video conference meeting with leaders of other ex-Soviet states.

He said they had plans to move between ex-Soviet Central Asian countries disguised as refugees.

Earlier this week, Putin warned of the threat of veteran fighters from Iraq and Syria with IS links crossing into Afghanistan, while Russia’s foreign ministry said it expected the Taliban, which recently gained control of the country, to deal with the threat.

On Friday, Putin said IS leaders in Afghanistan were seeking to project the group’s influence across former Soviet states in Central Asia — which Moscow sees as its backyard — to stir up religious and ethnic discord.

‘We need to interact’

“Terrorists are seeking to infiltrate the Commonwealth’s territory, including under the guise of refugees,” Putin said, referring to a group of ex-Soviet countries — some of which border Afghanistan.

The Taliban, which seized control of Kabul from a pro-Western government in mid-August, are seeking international recognition and aid.

Putin’s special envoy to Afghanistan Zamir Kabulov said on Friday that Tuesday’s talks would focus on trying “to work out a common position on the changing situation in Afghanistan”.

As for the talks the next day, Kabulov said Moscow did not expect any “breakthrough solutions” but would “openly state our complaints to the Afghan delegation”.

The Kremlin has reached out to the Taliban and hosted its representatives in Moscow several times in recent years.

While Moscow has been cautiously optimistic about the new leadership in Kabul, the Kremlin is concerned about instability spilling over into Central Asia where it has military bases.

Putin today said there was no need to rush with official recognition of the Taliban but noted that “we understand that we need to interact with them”.

In the 1980s, Moscow fought a disastrous decade-long war in Afghanistan that killed up to two million Afghans, forced seven million more from their homes and led to the deaths of more than 14,000 Soviet troops. — AFP