HomeEntertainmentIranian women are cutting their hair in protest after woman dies in...
Entertainment 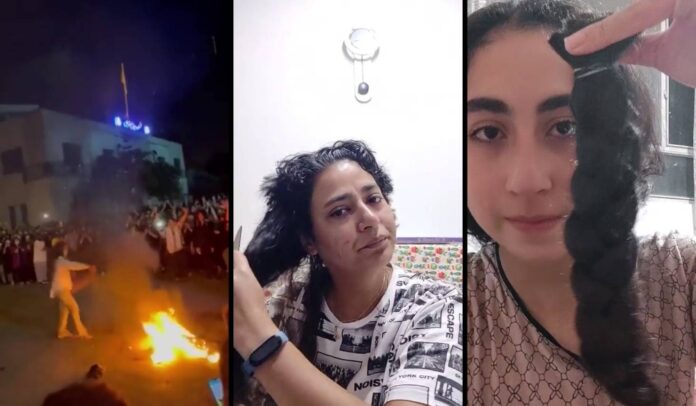 From street protests to cutting their hair online, women have been protesting the death of Mahsa Amini, who was detained for allegedly wearing improper clothing. — Pictures via Twitter/ AlirezaNader, Faezeh_Afshan and TikTok/ jiana

PETALING JAYA, Sept 22 — Women in Iran are cutting their hair and taking off their hijabs to protest the death of Mahsa Amini.

According to Al Jazeera, the 22-year-old suffered a stroke and several heart attacks while she was detained by the Gasht-e Ershad or “Guidance Patrol”.

However, witnesses reportedly claimed that Mahsa had been beaten by local authorities, while her family has insisted that she had been physically well prior to her arrest.

The incident has sparked unrest in several cities such as Tehran and Kermanshah, with thousands taking to the streets in protest against Mahsa’s alleged mistreatment.

Female protestors in particular, have been showing their defiance by publicly chopping off their hair, with some removing – and even burning their hijabs.

Women have also taken the protest online by posting videos of cutting their hair to social media.

One such video by Iranian singer Donya Dadrasan has gained over one million views at the time of writing.

Meanwhile, internet monitoring watchdog Netblocks claims that its network data shows a “near-total disruption” of internet access to parts of the country, with Instagram and Whatsapp being severely restricted.

Under Iran’s penal code, as published in RefWorld, women who appear in public without a proper hijab can be fined or be imprisoned from ten days to two months.