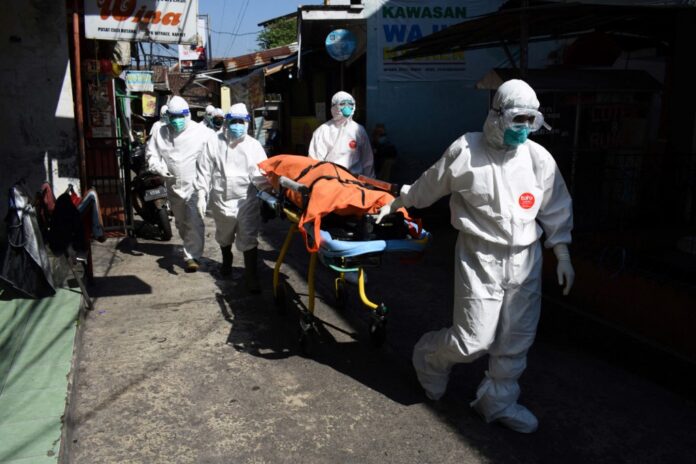 Health workers removed the body of a Covid-19 victim who died at home in Bandung on July 18, 2021. – AFP photo

JAKARTA (July 22): Indonesia has registered more than 3 million cases of Covid-19 since the first case was confirmed in the country in March last year.

According to Xinhua, the country’s Health Ministry reported on Thursday that the coronavirus cases across the archipelago rose by 49,509 within the past 24 hours to 3,033,339.

According to the ministry, the death toll added by 1,449 to 79,032. This has been the highest daily number of fatalities the country ever reported since the outbreak of the pandemic.

To date, more than 2.39 million have recovered from the disease.

The government recently decided to extend its restrictions on people’s mobility, which is locally called PPKM, on the most populated island Java and the resort spot of Bali as well as 15 other cities and districts outside the two islands until July 25. Initially, the curbs were in place from July 3 to July 20.

The restrictions require workers in non-essential sectors to work from home, malls and shopping centres to close, and restaurants to stop dine-in services.

A massive Covid-19 vaccination programme has been launched in Indonesia, home to more than 270 million people, since mid-January.

The government is targetting to vaccinate 208.2 million people using vaccines produced by a number of pharmaceutical manufacturers. The vaccine is free of charge for all Indonesians.

Indonesia on Thursday received a new shipment of raw materials from China to produce vaccine.

As of Thursday, at least 16.89 million people in the country have received two shots of a vaccine. Meanwhile, the number of those who had been injected with the first dose reached 43.15 million. – Bernama