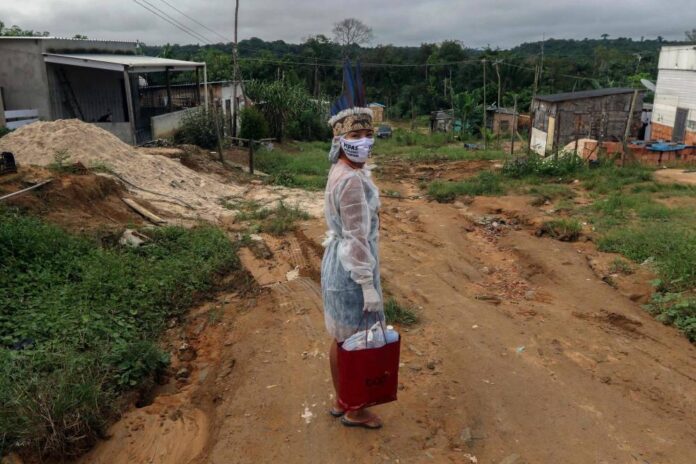 In this file photo taken on May 3, 2020, Witoto indigenous nursing assistant Vanda Ortega, 32, poses for a picture before starting her round of healthcare visits in the Parque das Tribos, an indigenous community in the suburbs of Manaus, Amazonas State, Brazil, during the Covid-19 pandemic. — AFP pic

MANAUS, Sept 29 — Four years after President Jair Bolsonaro came to office vowing not to allow “one more centimeter” of protected Indigenous reservations in Brazil, native peoples accuse him of violent, environmentally harmful policies that have been disastrous for them and their land.

With the far-right president fighting for re-election Sunday — trailing in the polls to leftist ex-president Luiz Inacio Lula da Silva (2003-2010) — a record 171 Indigenous candidates are running for state or federal office, vying to turn the page on what they say have been four catastrophic years for Brazil’s native peoples.

AFP spoke to Indigenous candidates and leaders across Brazil about what is at stake in the elections.

To Congressional candidate Sonia Guajajara, Bolsonaro’s time in office has been nothing short of “institutionalised genocide.”

The prominent Indigenous leader, who was named to Time magazine’s list of the world’s 100 most influential people in May, cites as evidence the president’s push to legalise mining on Indigenous reservations and his vocal support for wildcat gold miners — a group accused of invading native lands, raping and killing inhabitants, and poisoning their water with mercury.

“The four years of Bolsonaro’s government have been a true tragedy and an institutionalised genocide for Indigenous peoples,” says Guajajara, 48, who is running to become the first Indigenous woman to represent Sao Paulo in Congress.

Wearing a bright feather headdress and shaking a calabash rattle at a rally, the combative, charismatic Amazon rainforest native, who left home as a girl to get a university education, leads the crowd in chanting, “Get out, Bolsonaro!”

Guajajara, the leader of the Association of Brazil’s Indigenous Peoples (APIB), says she will demand that Lula — who has promised to create a ministry of Indigenous affairs — resume protecting native lands if elected.

“We want to rebuild all the pro-Indigenous policies the Bolsonaro government dismantled,” she says.

‘Sadness for our forest’

At home, the young chief organises patrols to stop illegal loggers and land-grabbers from invading the reservation in the southern Amazon that is home to his people, a tribe of some 200 hunter-gatherers — the subject of the film The Territory, released last month.

In his interactions with the world beyond, Bitate raises awareness about the plundering of the Uru-Eu-Wau-Wau’s land and Bolsonaro’s “anti-Indigenous government.”

“We’re very afraid, we’ve been receiving lots of threats — messages saying, ‘We’re coming for you, we’re going to kill all the children in the village,'” he says.

Invasions of their land are increasing, he says, and the authorities are slow to respond — especially Indigenous affairs agency FUNAI, which critics accuse Bolsonaro of gutting.

“The government has fired (FUNAI) officials, stopped them from doing their jobs…. FUNAI is finished. It’s been completely torn apart,” he says.

“We’re going through a time of very great sadness for our forest, which is being cut down and burned…. I’m not saying Lula would be great, but he would be better than Bolsonaro.”

Greeting supporters with a giant smile and infectious laugh, Vanda Ortega marches through the street at the head of an energetic parade with a mission: Elect the first-ever Indigenous representative from Amazonas, the state with the biggest share of Brazil’s 900,000 Indigenous people.

The 35-year-old Congressional candidate says she decided to run for office after watching the Bolsonaro administration’s chaotic response to the coronavirus pandemic, which hit Indigenous communities hard.

The nurse technician has told the story of how she struggled to care for patients amid the collapse of the public health services in state capital Manaus, where horrific scenes of Covid-19 victims suffocating to death without oxygen played out at the height of the pandemic.

The experience convinced her of “the importance of us (Indigenous peoples) having a voice in Congress to defend our land, our peoples’ lives, our rights,” she says.

“It’s so important, not only for Indigenous peoples but for the Amazon. We want to be in Congress.” — AFP