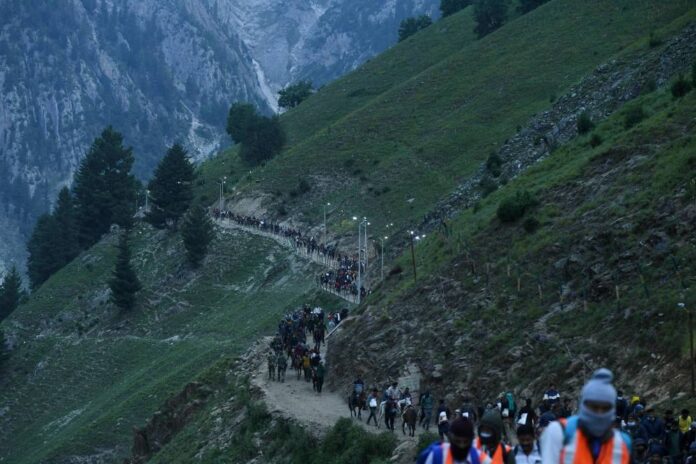 Hindu devotees make their way on foot, riding horses and carried by porters along a mountain path during their pilgrimage to the cave shrine of Amarnath, near Baltal on June 30, 2022. — AFP pic

PAHALGAM, July 2 — Thousands of chanting devotees from across India began trekking up through Himalayan passes in Indian-administered Kashmir Thursday at the start of a huge pilgrimage, accompanied by a major security operation.

Authorities expect around a million people to take part in a pilgrimage to the cave shrine at 3,900 meters (12,800 feet) containing a holy stalagmite over the coming 43 days.

The procession, which sees pilgrims trek uphill for several days or be transported by donkey or helicopter did not take place for two years because of the pandemic.

On Thursday devotees chanted religious hymns as tens of thousands of Indian soldiers guarded the twin routes of Pahalgam and Baltal leading to the shrine to the Hindu god Shiva.

Over 400 sandbag bunkers manned by armed soldiers dot the Himalayan landscape surrounding the shrine and along the routes to two base camps.

Authorities restricted locals from visiting the two tourist resorts of Pahalgam and Sonmarg that serve as base camps during the pilgrimage.

All traffic was being halted on the main highway to the start while convoys guarded by armed soldiers passed through, with all connecting roads blocked with coils of razor wire.

Dilip Sharma, from the northern Indian state of Rajasthan, said he was ecstatic to be able to undertake the pilgrimage again after three years.

“You can’t imagine how happy I am at being able to pay my obeisance to the lord again. I want to thank the government of India for very good arrangements,” Sharma told an AFP photographer along the trek to the shrine.

The event used to be low-key, with a few thousand pilgrims attending, until an armed insurgency against the Indian rule of Kashmir erupted in 1989.

Since then the religious practice — and accompanying security mobilisation — have grown, as has its political significance.

The territory is divided between India and Pakistan and claimed by both.

Rebels have often said that the pilgrimage is not a target but have warned in the past that if the religious event was used to establish Hindu domination of the territory they would act.

On Thursday some of the pilgrims chanted a slogan equating Hindu nationalist Prime Minister Narendra Modi to a deity, an AFP videographer said.

As an additional security measure this year, authorities assigned all pilgrims a unique radio identification tag to closely monitor their movement. — AFP