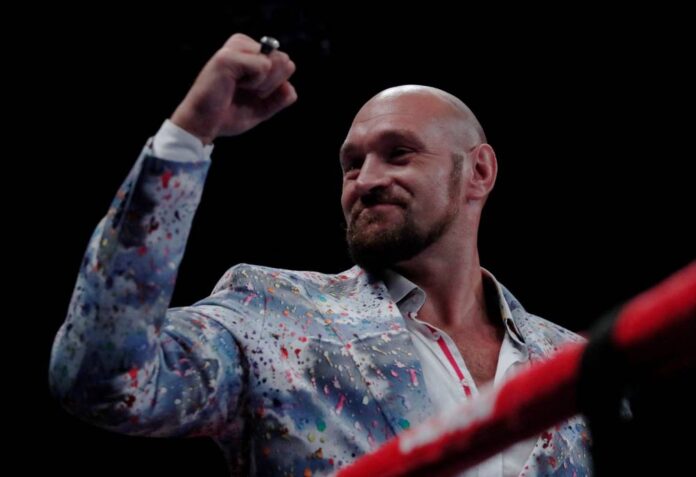 Tyson Fury before the fight between Joe Joyce and Joseph Parker for the WBO Interim World Heavyweight Title at the AO Arena, Manchester September 24, 2022. — Reuters pic

LONDON, Nov 15 — Tyson Fury said he made his brief retirement from boxing because he knew no other way of “keeping it sane”.

After beating Dillian Whyte at Wembley in April the undefeated WBC heavyweight champion said he was hanging up his gloves.

But the 34-year-old reversed his decision several times before confirming he would defend his title in an all-British bout against Derek Chisora at the Tottenham Hotspur Stadium in London on December 3.

That fight was set up after Fury’s attempts to call out fellow world heavyweight champion Oleksandr Usyk and British rival Anthony Joshua failed to produce a high-profile fight.

In an interview with BT Sport boxing, Fury said he returned after experiencing similar emotions to those he felt after his shock win over Wladimir Klitschko in 2015.

That victory gave Fury the WBA, IBF and WBO belts, but he soon he suffered alcohol and drug problems that led to a public mental health breakdown.

“After I beat Dillian Whyte in April, I really meant retirement and I swear to God I couldn’t have been more sure of something in all my life,” Fury said.

“I had a few months out of the ring, I was writing my third book and I am producing a song as well for the World Cup, so I was really busy. But, without boxing, I just felt I didn’t have any purpose in my life anymore.

He added: “I ain’t back boxing for a belt. Or back boxing for some more money, to win another five or 25 fights or to unify the division, I am boxing because of this (his head).

“And without it, (my head) is going downhill rapidly and I don’t know any other way of keeping it sane. This is me being brutally honest, speaking from the heart. I do not know how to quit.”

During the interview, Fury said he was open to more bouts on home soil and even a fourth fight against Deontay Wilder.

But the fight Fury wants above all others is with Ukraine’s Usyk, who defended his WBA, IBF and WBO belts against Joshua in Saudi Arabia in August.

“If Usyk can be made and they actually want the fight, then we’ll do that fight next providing I win and everything goes right, because I don’t look past anything and you can’t count your chickens before they hatch,” Fury said.

“If the Usyk fight happens, more than likely it will be in Saudi Arabia. Get through him and then back to the UK.

“Deontay Wilder is now fighting Andy Ruiz Jr for a final eliminator to fight me. Now that would be amazing here at Wembley again, wouldn’t it? I’ve been over there (to the United States) three times now. If he wants the fourth fight, he’s got to come here.” — AFP