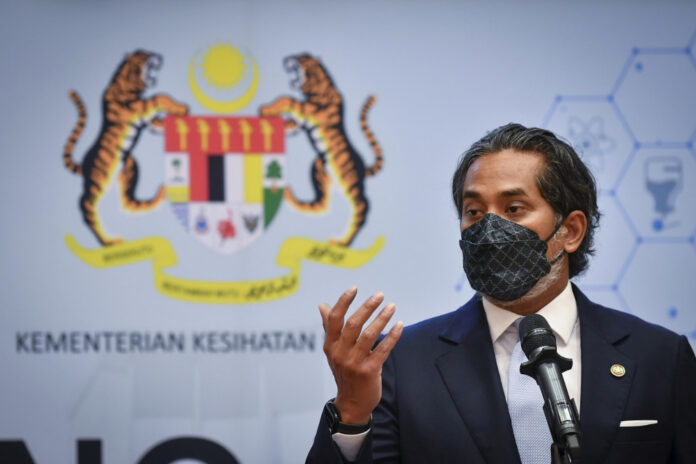 Apart from the Penang death, Health Minister Khairy Jamaluddin today noted that there have also been reports and complaints received regarding bullying incidents and mental stress problems faced by not only trainee doctors but also by healthcare services personnel in the course of their duties. — Bernama pic

KUALA LUMPUR, May 13 — The Health Ministry (MoH) announced the official formation today of the independent Healthcare Work Culture Improvement Task Force (HWCITF) to look into matters such as the death of a trainee doctor in Penang Hospital, amid reports of bullying incidents and mental stress faced by healthcare personnel.

Apart from the Penang death, Health Minister Khairy Jamaluddin today noted that there have also been reports and complaints received regarding bullying incidents and mental stress problems faced by not only trainee doctors but also by healthcare services personnel in the course of their duties.

He then said that this newly-formed independent task force would therefore cover aspects of work culture and the management of healthcare staff personnel to ensure the delivery of quality and professional service.

“I wish to stress that the Health Ministry of Malaysia is very committed in its efforts to improve the working environment for health services personnel in general and to eliminate toxic work culture in the Health Ministry’s health facilities,” Khairy said in the statement announcing the formation and panel members of this new task force.

“I also acknowledge this effort would need a little time to bear fruit, but I wish to stress that a conducive and harmonious working environment starts with respecting, supporting and helping our colleagues. Now is not the time to quarrel, not the time to point fingers.”

Noting that healthcare workers had faced the Covid-19 pandemic challenge together and with the country now in the phase of transitioning to the endemic phase through their commitment and close cooperation, Khairy stressed that each and every one of the healthcare personnel had managed to create an important history together. He gave credit to all, including nurses, trainee doctors or housemen, ambulance drivers, medical officers, specialists or those who had planned the pandemic management plan.

With over 270,000 personnel in the Health Ministry, Khairy noted their main responsibility of ensuring the safety of all patients that are treated and the delivery of high quality health services to Malaysians.

For this new task force which will be headed by the Ministry of Science, Technology and Innovation’s former secretary-general Prof Datuk Siti Hamisah Tapsir and to have eight experts as members, Khairy said it would present its findings to him in two months’ time from today.

What the task force will do

Earlier in his statement, Khairy said he had as health minister evaluated and chose the members of the HWCITF, and said that its purpose and role would cover six areas.

The first would be to analyse and assess work culture and the management of health services personnel generally and trainee doctors specifically, which would include workload and work hours, complaint channels, leadership, mentorship and training, performance evaluation, service delivery and career opportunities.

It would also include analysing information and the findings of the investigation into the incident of the trainee doctor’s death at Penang Hospital.

The task force would also obtain information about the work culture and the process of human resources management for health services generally and trainee doctors in particular, with briefings and engagement sessions to be held with the related divisions in the Health Ministry, Health Ministry personnel, statutory bodies, non-governmental bodies and any individuals based on requirements.

Khairy said HWCITF would also propose the appointment of related consultants to the Health Ministry to support the task force’s functions if necessary; to carry out related studies and analysis; and to prepare evaluation reports and proposals for the improvement of work culture and management of human resources — for health services in general and for trainee doctors in particular — to be presented to the health minister within two months from the task force’s date of formation (today).

Siti Hamisah, who will be chairing the task force, has 33 years of experience as a civil servant including as the Higher Education director-general from 2017 to 2019 and is currently the vice-chancellor of UCSI University.

The eight members are said to be professionals and experts in their own fields, including Datuk Hamidah Naziadin who has 31 years of experience in the human resources field and who had in the past been chief human resources officer for CIMB Group and also former CEO of Yayasan CIMB handling the bank’s corporate social responsibility agenda.

Hamidah is also a National Sports Council board member and someone who is active in mentoring and training the youth and women in various fields.

The second member is Prof Dr Zabidi AM Hussin who is a paediatrician specialising in paediatric neurology and medical education, and who is currently also pro-vice chancellor at Academic and Professor of Paediatrics at the International Medical University’s Faculty of Medicine and Health, as well as the chair of the Malaysia Medical Council’s sub-committee on trainee doctors or housemen.

The other members include lawyer Mohamed Ridza Mohamed Abdulla and associate professor Dr Amer Siddiq Amer Nordin who is a consultant psychiatrist and smoking cessation specialist at the Department of Psychological Medicine of University of Malaya’s Faculty of Medicine.

Also in the task force is IMU Healthcare’s chief executive officer Dr Chong Su-Lin who is both a UK medicine graduate and having a Masters in Business Administration from the London School of Business, with her experience in both the medical and management field including previous roles as CEO of Sunway Medical Centre, CEO of Prince Court Medical Centre and executive director of Beacon International Specialist Centre.

Manvir Victor who is an activist and representative of the World Health Organisation as a global patient advocate is also part of the task force, with his expertise stated as being in communications and media, patient safety, brand development, crisis and reputation management.

Apart from a representative from the Public Services Department, the task force will also include Sivaramakrishnan Balasubramanian who is said to have expertise in organisation and work design to solve structural problems, succession planning and career pathways, building potential and strategic manpower planning.