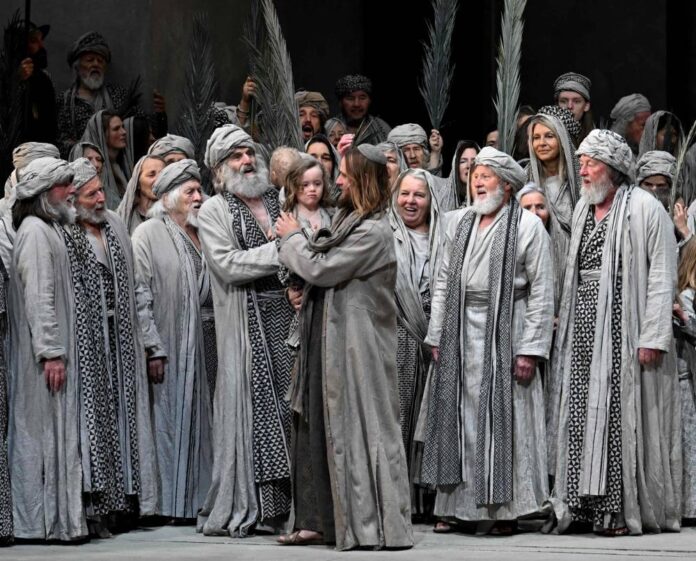 This file photo taken on May 4, 2022 shows Frederik Mayet as Jesus and ensemble members performing during a rehearsal at Oberammergau’s Passion Play theatre in Oberammergau, southern Germany. — AFP pic

OBERAMMERGAU, July 3 — Walk around the German Alpine village of Oberammergau, and the chances are you’ll run into Jesus or one of his 12 disciples.

Of the 5,500 people living there, 1,400 — aged from three months to 85 — are participating this year in the once-a-decade staging of an elaborate “Passion Play” depicting the death and resurrection of Jesus Christ.

Dating back to 1634, the tradition has persisted through four centuries of wars, religious turmoil and pandemics — including the most recent Covid-19 crisis which caused the show to be postponed by two years.

“I think we’re a bit stubborn,” says Frederic Mayet, 42, when asked how the village has managed to hold on to the tradition.

Mayet, who is playing Jesus for the second time this year, says the Passion Play has become a big part of the town’s identity.

The only prerequisite for taking part in the five-hour show, whether as an actor, chorister or backstage assistant, is that you were born in Oberammergau or have lived here for at least 20 years.

“I remember that we talked about it in kindergarten. I didn’t really know what it was about, but of course I wanted to take part,” says Cengiz Gorur, 22, who is playing Judas.

The tradition, which dates back to the Thirty Years’ War, was born from a belief that staging the play would help keep the town safe from disease.

Legend has it that, after the first performance, the plague disappeared from the town.

In the picturesque Alpine village, Jesus and his disciples are everywhere — from paintings on the facades of old houses to carved wooden figures in shop windows.

You also can’t help feeling that there is a higher-than-average quota of men with long hair and beards wandering the streets.

An intricate image of Jesus graces the stage of the open-air Passion Play theatre, where the latest edition of the show is being held from mid-May to October 2.

“What has always fascinated me is the quality of the relationship between all the participants, young and old. It’s a beautiful community, a sort of ‘Passion’ family,” says Walter Lang, 83.

He’s just sad that his wife, who died in February, will not be among the participants this year.

“My parents met at a Passion Play, and I also met my future wife at one,” says Andreas Roedl, village mayor and choir member.

Gorur, who has Turkish roots, was spotted in 2016 by Christian Stueckl, the head of the Munich People’s Theatre who will direct the play for the fourth time this year.

“I didn’t really know what to do with my life. I probably would have ended up selling cars, the typical story,” he laughs.

Now, he’s due to start studying drama in Munich this autumn.

Stueckl “has done a lot for the reputation of the show, which he has revolutionised” over the past 40 years, according to Barbara Schuster, 35, a human resources manager who is playing Mary Magdalene.

“Going to the Passion Play used to be like going to mass. Now it’s a real theatrical show,” she says.

In the 1980s, Stueckl cut all the parts of the text that accused the Jews of being responsible for the crucifixion of Jesus, freeing the play from anti-Semitic connotations.

“Hitler had used the Passion Play for his propaganda,” Schuster points out.

The play’s themes of violence, poverty and sickness are reflected in today’s world through the war in Ukraine and the Covid-19 pandemic, says Mayet, the actor playing Jesus.

“Apparently we have the same problems as 2,000 years ago,” he says.

For 83-year-old Lang, who is playing a peasant this year, the “Hallelujah” after Christ has risen for the final time in October will be a particularly moving moment.

“Because we don’t know if we’ll be there again next time,” he says, his eyes filling with tears. — AFP

Facebook
Twitter
Pinterest
WhatsApp
Previous articleReport: Some in Cabinet standing in way of anti-hopping legislation
Next articleSarawak Muda wants ceiling prices for chicken, eggs in state to be reviewed