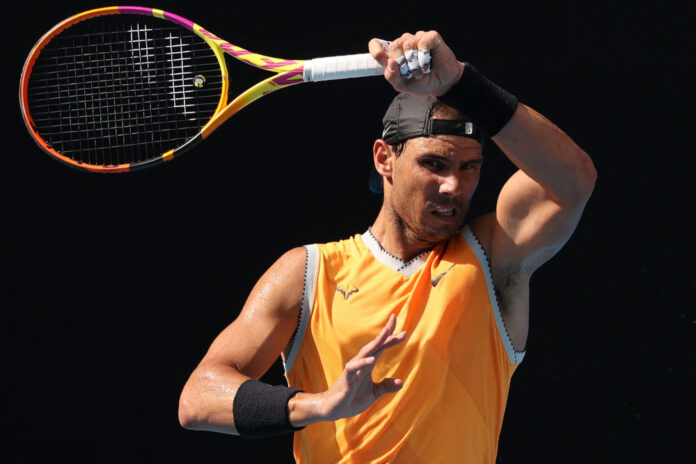 Rafael Nadal of Spain attends a practice session ahead of the Australian Open tennis tournament in Melbourne, January 13, 2022. — AFP pic

MELBOURNE, Jan 14 — Novak Djokovic’s Australian Open hopes are not quite dead yet but the renewed uncertainty and disruption engulfing the defending champion opens the door for rivals including Rafael Nadal.

The world number one from Serbia, who would be chasing a record 21st Grand Slam when the showpiece begins next week, had his visa cancelled for a second time today in the latest twist to the saga.

The Australian government will now attempt to deport him, but Djokovic looks set to fight it and he remains top seed and in the draw at Melbourne Park, for now.

The 34-year-old flew in last week claiming a vaccine exemption because of a positive Covid test in mid-December, but border officials rejected it, his visa was revoked and he was moved to a detention centre.

Djokovic’s legal team overturned that in court, freeing the top seed to begin his preparations for a tournament in which he has not lost a match since 2018. The Australian government however hit back anew on Friday.

“Despite all that has happened, I want to stay and try to compete,” he tweeted before the latest setback, adding that he “remained focused” on winning his favourite Slam despite his unprecedented build-up.

If Djokovic, who is drawn against fellow Serb Miomir Kecmanovic in the first round, does play and goes on to win the Australian Open he would become the most successful men’s tennis player in history with 21 majors.

Given his preparations, it would be the most remarkable of the lot.

His ninth victory in 17 visits at last year’s Covid-delayed Australian Open reinforced his dominance in Melbourne, where he claimed his first Grand Slam title in 2008.

With Roger Federer injured and absent, Nadal and world number two Daniil Medvedev look to be two of the main beneficiaries if Djokovic does not play, or does play and is woefully ill-prepared.

Ageing Spanish great Nadal — one of the “Big Three” alongside Djokovic and Federer — is also chasing a record 21st major.

However, it is now 13 years since the injury-prone Nadal, who begins his campaign against American Marcos Giron, won his lone title in Melbourne, despite four further trips to the final.

Nadal battled a foot injury for much of last year, ending his season in August, then contracted Covid in December, saying it left him “very sick”.

But the 13-time French Open champion swept through the field last week to win a warm-up event at Melbourne Park, suggesting he is suffering no long-term effects from the virus.

Russia’s Medvedev, who faces Switzerland’s Henri Laaksonen in the first round, conquered Djokovic in the US Open final in September to win his maiden major and end the world number one’s bid to win a calendar Grand Slam.

Britain’s Andy Murray, runner-up in the Australian Open five times, returns on a wildcard for the first time since an emotional 2019 “farewell” appearance after undergoing hip surgery that enabled him to make a remarkable comeback.

The 34-year-old will begin his bid against 21st-seeded Nikoloz Basilashvili and the former number one is in form — the Scot reached his first final since 2019 today in a massive boost to his confidence. — AFP