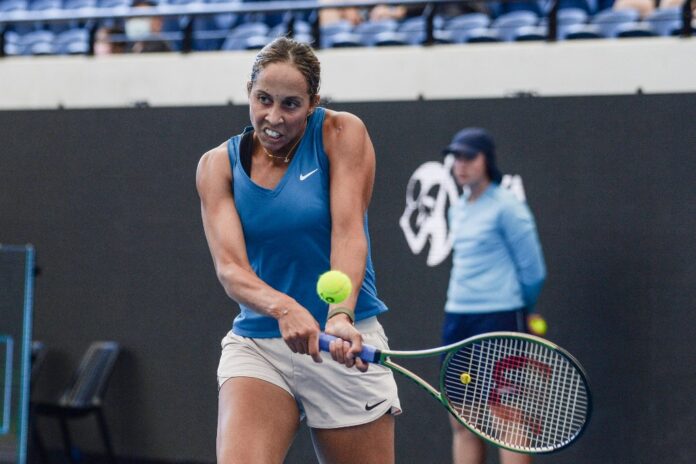 Madison Keys of the US hits a return against Alison Riske of the US in the women’s singles final match at the Adelaide International WTA 250 tennis tournament in Adelaide on January 15, 2022. — AFP pic

She hit 28 winners compared to Riske’s three in an almost flawless performance.

“We had a great off-season and the absolute change you have all helped me make mentally has meant the world to me,” Keys said to her support team during the awards presentation.

It was a tonic for unseeded Keys who has a tough opening round match at Melbourne Park against 2020 Australian Open champion Sofia Kenin.

Having beaten American teenager and third seed Coco Gauff in a three-set semi-final thriller yesterday, Keys has started the season confidently and shown the form that saw her rise to a career-high ranking of seven in 2016.

It was the sixth straight victory for Keys over her frequent practice partner.

The 26-year-old was in a belligerent mood with her ferocious groundstrokes overwhelming a flustered Riske, who could never get her game going and struggled badly on serve.

Keys dominated the baseline rallies, grabbing an early break and smothered her error-strewn opponent who hit just one winner in the opening five games.

After powering through the first set, Keys kept her foot on the gas as she gained an early break in the second set to continue the lopsided contest.

World No.57 Riske showed more fight after that but it was not enough.

She plays 69th ranked Donna Vekic of Croatia in the first round of the Australian Open. — AFP