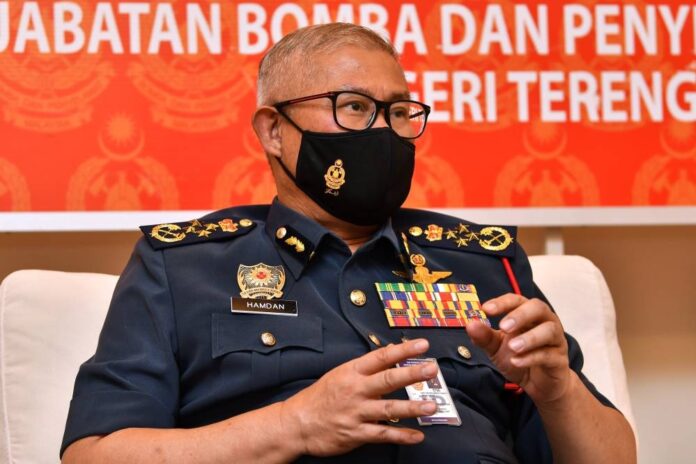 KUALA NERUS, Aug 7 –The Malaysian Fire and Rescue Department (JBPM) is cooperating with the Department of National Unity and National Integration (JPNIN) to set up a unity firefighting team in Areas of Rukun Tetangga (KRT) across the country.

JBPM director-general Datuk Seri Mohammad Hamdan Wahid said it would act as an agent for the department in delivering early emergency assistance to local communities in the event of any untoward incident before the arrival of rescue teams from certified and relevant agencies.

He said that his department had identified 48 KRTs across the country to be initially trained with basic knowledge and skills to deal with emergencies.

“We have 200 KRTs all over the country that suitable for the setting up of firefighting units. But due to financial constraints, we are focusing on three teams first in each state.

“However, for states that have the ability, they can set up as many unit fire brigades as possible for the purpose of dealing with emergencies,” he said after the Terengganu JBPM Excellent Service and 30 Years of Service Award Ceremony for the Year 2021, here today.

A total of 55 Terengganu fire department personnel and officers received Excellent Service awards while another 12 were awarded for their 30 years of service.

Mohammad Hamdan added that besides skills and training, unity fire brigades will also be provided with basic equipment to be placed in their respective KRT.

He said, so far his department has launched a unity firefighting team at KRT Kepala Batas, Penang in conjunction with the celebration of Firefighters Day 2022, last June.

In a separate development, he said the department had also carried out the recruitment of 1,000 new personnel to be absorbed into suitable fire stations across the country.

It is to cover vacancies and lack of personnel and officers due to retirement and other reasons.

“It is true that there is a lack of staff because we did not hire new officers throughout the pandemic.

“Every year there are about 200 to 400 staff pensioning off, so there are a lot of vacancies in many places,” he said. — Bernama