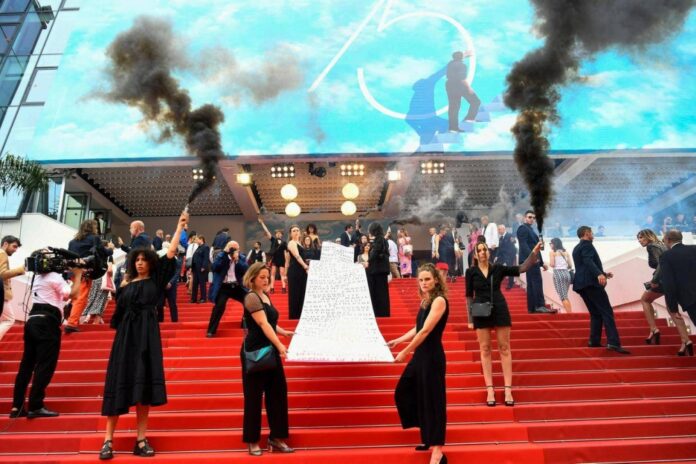 Feminist group Les Colleuses held a demonstration at the premiere of ‘Holy Spider’, a film about the deaths of sex workers in Iran. — Photo by Piroschka Van De Wouw/Reuters

KUALA LUMPUR, 23 May — The premiere screening of Iranian thriller Holy Spider at the Cannes Film Festival yesterday, saw 12 women dressed in black in a demonstration held to highlight the 129 women killed in France since the previous festival in 2021.

The group paused on the steps of the Palais de Festivals and set off black smoke grenades, as some raised their fist in solidarity with the victims of femicides in France.

The demonstration occurred before the cast and director of the film arrived on the red carpet.

This is the second protest highlighting violence against women to have occurred at the festival in three days.

No attempts were made by the security to stop the peaceful protest.

Holy Spider, directed by Iranian Ali Abbasi, tells the story of a female journalist investigating the murders of sex workers in the Iranian holy city of Mashhad.

The film is based on the murders of the real-life Iranian serial killer, Saeed Hanaei (nicknamed ‘The Spider Killer’), who confessed to killing 16 women.

On Friday, another protest against female violence took place when a woman rushed onto the red carpet at the premiere of George Miller’s Three Thousand Years of Longing.

The woman stripped off her gown to reveal the words ‘Stop raping us’ behind the painted Ukrainian flag on her chest, with her waist and legs painted red with handprints.

She screamed her message, speaking out against the sexual violence by the Russian forces in the Ukrainian war.

Security promptly covered her in a coat and escorted her away from the red carpet where the cast of the film was still present.

The woman is believed to be part of the radical feminist group ‘Scum’.

Three years ago in 2018, 82 female actresses and directors including Kristen Stewart, Cate Blanchett, and Salma Hayek marched in solidarity on the Palais steps to demand gender equality in the festival’s selection of films.