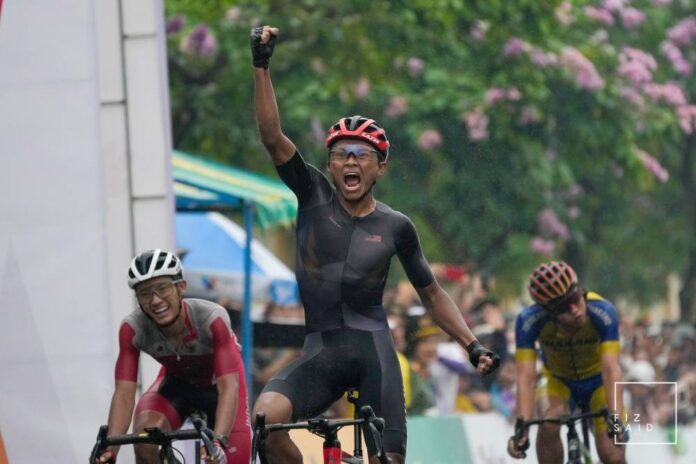 HANOI, May 21 — National cyclist Muhammad Nur Aiman Mohd Zariff displayed an energetic pace towards the finish line to win the gold medal in the men’s road race of the 31st SEA Games held in Hoa Binh Province, about 75km from here, today.

The Terengganu Cycling Team (TSG) rider was in his element with 1km to go before the finish line, overcoming three other riders in the front group to contribute Malaysia’s 37th gold medal at the Games this time.

The 25-year-old Le Tour de Langkawi (LTdL) 2020 King of the Mountan crossed the finish line in a time of 3 hours 48 minutes and 22 seconds, overcoming his Indonesian challenger Aiman Cahyadi who had to settle for second place while Thai rider Navuti Liphongyu took the bronze.

Both the Indonesian and Thai riders also recorded the same time as Muhammad Nur Aiman.

“Thank God, today I was able to win the gold medal for Malaysia … thanks very much to Allah SWT,” he said on the Facebook of the Malaysian National Cycling Federation (MNCF).

“Our boys did very well. Thank you Mr President (MNCF president Datuk Abu Samah Abdul Wahab). You brought me back as a coach here and I gave them very good advice and I hope they will continue their good work,” he said on the MNCF’s social media site.

After winning 13 gold, 10 silver and three bronze medals in the cycling events at the 2017 Kuala Lumpur SEA Games, the national squad took home only one bronze through Sheikh Muhammad Taslim Shaikh Mohd Raziff in BMX (men’s freestyle flat land) out of 13 golds offered in the sport in Philippines in 2019.

Following that, MNCF decided to get the services Joo Ngan, a former national coach and cyclist, who had once guided former Olympian M. Kumaresan, in organising a winning strategy in Hanoi. — Bernama