Djokovic happy to put on Sunday best after Kyrgios fireworks 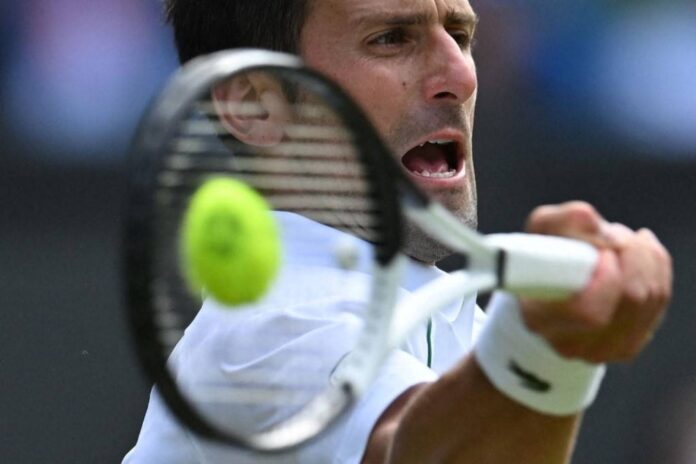 Serbia’s Novak Djokovic returns the ball to Serbia’s Miomir Kecmanovic during their men’s singles tennis match on the fifth day of the 2022 Wimbledon Championships at The All England Tennis Club in Wimbledon, southwest London, on July 1, 2022. — AFP pic

LONDON, July 3 — Novak Djokovic admits he is a convert to Wimbledon’s new middle Sunday play rule as the three-time defending champion aims at reaching the quarter-finals for the 13th time.

His last-16 tie will be the highlight of a landmark day which sees play scheduled at the tournament for the first time on the middle Sunday.

It has traditionally been a rest day at Wimbledon with the exception of 1991, 1997, 2004 and 2016 when rain in the opening week forced a quick planning reset.

“All the other Grand Slams are playing on mid Sunday. I’m glad that Wimbledon has introduced that. I’m in favour of the rule change,” said Djokovic.

The 35-year-old dropped a set in his opening win over Kwon Soon-woo but has since coasted, losing just 14 games in the next two rounds.

Van Rijthoven was ranked outside the top 200 just a month ago.

Having won his first ATP title on grass at ‘s-Hertogenbosch, the Dutchman is making the most of his Wimbledon wild card.

He has dropped serve just three times and has defeated seeded players Reilly Opelka and Nikoloz Basilashvili to make the fourth round.

Plagued by physical problems since he was 18, Van Rijthoven has endured groin and wrist injuries as well as back spasms.

One surgery was required to cure a thrombosis in his arm.

“Before the tournament started, it was a dream for me to play Djokovic,” said Van Rijthoven, only the seventh man since 2000 to reach the round of 16 on his Grand Slam debut.

Victory for Djokovic will set-up a mouthwatering quarter-final against Carlos Alcaraz if the Spanish teenager sees off Italy’s Jannik Sinner.

The swashbuckling 19-year-old Alcaraz is bidding to reach his third Slam quarter-final but first at Wimbledon.

Sinner is also seeking a first quarter-final at Wimbledon having fallen in the first round on his main draw debut last year.

But mercurial Australian Nick Kyrgios cannot be ruled out after he defeated Stefanos Tsitsipas in a bad-tempered clash on Saturday night.

Tsitsipas branded Kyrgios “a bully” with an “evil side” after a fiery third round clash which saw both men warned for their behaviour.

“It’s constant bullying, that’s what he does,” the Greek fourth seed said.

“He bullies the opponents. He was probably a bully at school himself. I don’t like bullies.”

Kyrgios branded the Greek as “soft”.

After world number one Iga Swiatek was knocked out Saturday, the bottom half of the women’s draw is also wide open with world number two Ons Jabeur the only top 10 player remaining.

She tackles Belgian 24th seed Elise Mertens who knocked out 2018 champion Angelique Kerber in the last 32 having saved two match points to beat Panna Udvardy in the second round.

The Tunisian has only dropped 13 games in three rounds, spending just three hours and six minutes on court.

Mertens needed three hours and 15 minutes just to see off Udvardy in the tournament’s longest women’s match so far.

Should Jabeur make the quarter-finals for a second successive year, she will play either France’s Caroline Garcia or Marie Bouzkova of the Czech Republic.