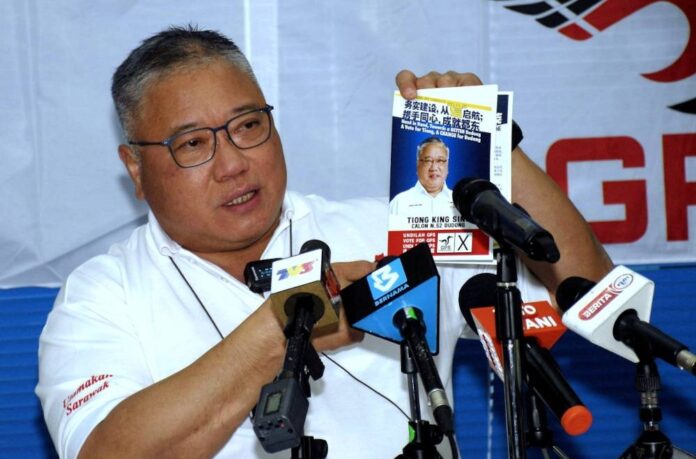 Datuk Seri Tiong King Sing added the chairmen and board members of state government agencies or government-linked companies must be held by the ministers, deputy ministers and permanent secretaries of the relevant state ministries as stipulated by the State Constitution. — Bernama pic

KUCHING, May 20 — Dudong assemblyman Datuk Seri Tiong King Sing today urged the Sarawak government to explore the possibility of allowing elected representatives to participate in state-owned companies or government-linked companies as chairmen and board members.

He said those appointed, who are without any ministerial positions, must be professionals in their own fields.

“Elected representatives can become a bridge for all parties in the private and public sectors by reflecting the voices and suggestions of the public in a timely manner,” he said during the debate on the opening address of the State Assembly by the Governor Tun Abdul Taib Mahmud.

Tiong, who is also Bintulu MP, said outside of this, they can make use of their status to elicit resources and cooperation from the relevant parties, to effectively promote progress, reform, and breakthrough existing bottlenecks in the system that had been hindering forward movement.

He added the chairmen and board members of state government agencies or government-linked companies must be held by the ministers, deputy ministers and permanent secretaries of the relevant state ministries as stipulated by the State Constitution.

He said elected representatives must be encouraged to participate in the system of the government departments and agencies while the ministers, deputy ministers and permanent secretaries should be more focused on planning of development, rectifying shortcomings, improving efficiencies and reducing bureaucracy.

He said he expects the elected representatives to work on reducing hindrances if they are appointed as chairmen or board members of government companies and government-linked companies.

He said elected representatives will be able to understand the real issues of any particular organisation by attending their meetings and then report back to the relevant ministers for actions to be taken.

Tiong stressed that the people are frustrated with excessive bureaucracy, inefficient implementation of policies and shortcomings and want solutions to address the issues of public concerns.

He called for the decentralisation of certain government agencies and departments to reduce red tape and bureaucracy, citing State Public Works Department (JKR) and Syarikat Sesco Berhad (Sesco) as examples.

He said the existing structures of JKR and Sesco have become too centralised, causing much public confusion and a lot of inconveniences to the public.

He said the functions of these two agencies need to be decentralised by empowering their regional offices to be more accountable in resolving issues and project implementation.

“This can ensure that the people’s problems and public complaints can be promptly addressed,” he said.