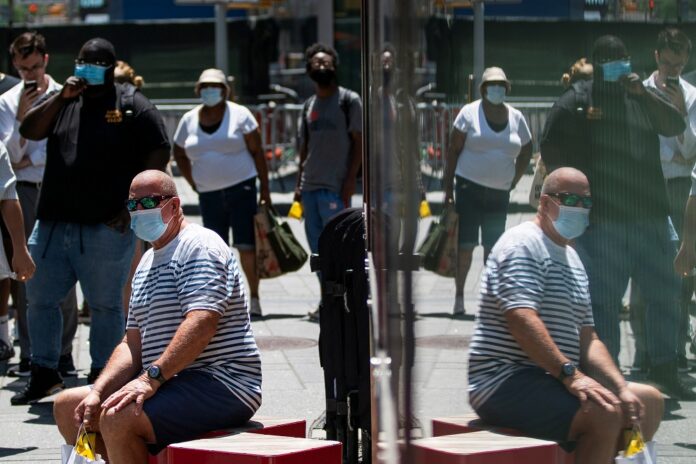 The United States reported 1.35 million new coronavirus infections on Monday, according to a Reuters tally, the highest daily total for any country in the world. — Reuters pic

Biden, who has been accused of focusing on vaccinations at the expense of testing and support for struggling healthcare systems, told reporters yesterday he was “confident we’re on the right track” to fight the pandemic.

A surge in cases and hospitalisations has forced Americans to cancel travel plans, shuttered entertainment venues, and scrambled plans for students and teachers to return to school and workers to go back to the office.

The heads of the Food and Drug Administration, the National Institutes of Health, and the Centres for Disease Control and Prevention said the protracted battle against the virus has made clear the need for easier access to testing, better therapies and a vaccine more widely effective against a range of variants.

Janet Woodcock, the FDA’s acting commissioner, acknowledged the agencies’ challenges in dealing with the pandemic after two years, especially amid Omicron, but said the focus now needed to be on the current surge.

“I don’t think prior approaches reflect what’s going on right now. I think it’s hard to process what’s actually happening right now, which is most people are going to get Covid,” she told a Senate committee hearing. “And what we need to do is make sure the hospitals can still function, transportation, other essential services are not disrupted while this happens. I think after that will be a good time to reassess how we’re approaching this pandemic.”

Dawn O’Connell, assistant Health and Human Services secretary for preparedness and response, said at the same hearing that the administration was working on shipping out the 500 million at-home Covid-19 tests ordered by Biden. The first batch goes out later this month and the rest in the next 60 days.

Democratic and Republican senators at the hearing lamented testing woes and other problems even as they vowed support for the agencies and the fight ahead, including the possibility of more funds.

The United States reported 1.35 million new coronavirus infections on Monday, according to a Reuters tally, the highest daily total for any country in the world. Omicron was estimated to account for 98.3 per cent of total new coronavirus cases circulating in the country as of January 8, the CDC said yesterday.

A closely watched projection from the Institute for Health Metrics and Evaluation (IHME) at the University of Washington estimates that number is far higher due to the likelihood that many more infections go undetected, either because people are without symptoms or do not have access to testing.

As a result, the IHME model suggests that the US surge fuelled largely by Omicron may have already hit a daily peak of more than 6 million cases, and could drop significantly from that point by the end of this month. But disruptions to health systems, schools and businesses might not resolve quickly even as infections decrease.

After a surge of Covid-19 cases that overwhelmed some hospitals in New York state, Governor Kathy Hochul said yesterday that the tide might be turning.

In Chicago, the seven-day average of cases showed indications of a decrease last week, dropping 8 per cent since the week prior that saw 5,200 cases, city data showed.

The Omicron surge led to a tense standoff between city officials and the union representing most of the city’s public school teachers that canceled classes for a week.

Teachers reached an agreement on Covid-19 safeguards with the district on Monday, and the system’s 340,000 students are due back to school today.

The walkout began with a union vote to reinstate virtual instruction and a push for more rigorous safety protocols, including wider testing, as the Omicron variant spread. Mayor Lori Lightfoot has pushed to keep schools open, citing, among other factors, how remote learning disproportionately affects minority students.

While most US public school districts have reopened their campuses for the new year, education systems in some major cities have opted for online learning or delayed back-to-classroom plans due to staff shortages, in some cases caused by Covid illnesses.

In New York City, some students, wrapped in winter coats to protect them against freezing weather, staged a walkout yesterday over Covid-19 concerns in schools. — Reuters