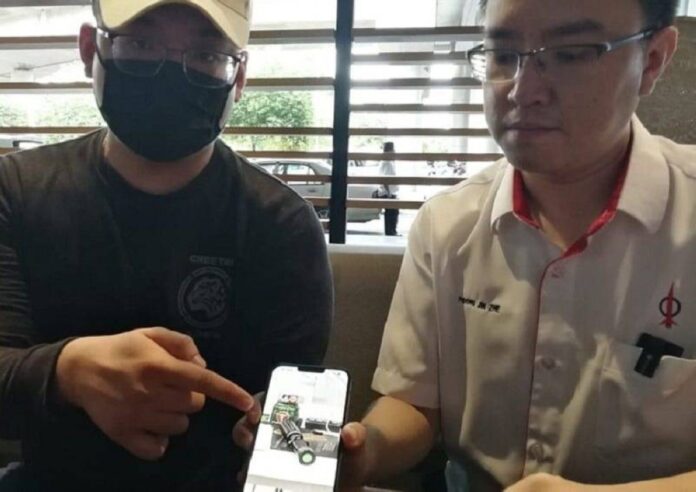 Eric (left) pointing at the electric rod used to torture insubordinate ‘workers’ when he was held captive in Cambodia. — Picture via Borneo Post

KOTA KINABALU, Sept 28 — A job scam victim from Sabah returned home on Tuesday after spending a gruelling and scary three months in Cambodia.

After the experience, the 28-year-old father of two urged people to not simply trust anyone, particularly those with the promise of making a quick buck.

Requesting to be known only by his first name, Eric arrived at the Kota Kinabalu International Airport on Tuesday and held a press conference to warn other Sabahans so that they will not fall into the same trap.

The former salesman in Miri, Sarawak, claimed that he heard of the opportunity of making fast cash from an online friend from Sibu, also in Sarawak.

He told a translator from Democratic Action Party (DAP) on Tuesday that his online friend whom he has befriended for about six months or so, told him that he would receive US$5,000 for each bank account he opened in Thailand.

He alleged that his friend had asked him to open three bank accounts in the country and claimed that he did not know what the bank accounts were for.

Eric added that he did not think twice about the offer because he trusted his friend.

He also told the translator that he had told his aunt about his plan to travel to Thailand, but she tried to dissuade him from going but to no avail.

He also said that when he arrived in Kuala Lumpur, he noticed that his ticket was bound to Cambodia.

When he asked his friend (from Sarawak) about it, the latter told him that he would be traveling to Thailand by car from Cambodia.

Again, he said he did not question it since his friend said so and boarded an airplane to Cambodia.

He added that upon his arrival, he was brought to a rural place in Cambodia where he was beaten and held captive in a room because of insubordination, and after a few weeks, he was sold to another place of work allegedly run by Chinese nationals.

He told the translator that he was sold a total of three times to places run by Chinese people.

Eric said that he was given a handphone in his last place of work in Cambodia.

He explained that he was working for a telephone scam company and he was there for a month.

He added that they were warned against using the handphone to call outside people, for taking pictures and videos and for sending information of the area.

However, he managed to get the Luyang assemblyman’s contact from his friend and contacted Ginger Phoong.

The first contact between Eric and Phoong was on August 9 where Eric also shared his exact location.

He added that he met other Malaysians who were also restrained like himself, although he was unsure if any of them were from Sabah. Most of those restrained were Chinese nationals.

Eric also shared that he was kept at a 13-floor building resembling a hotel and there were 10 groups consisting of 10 people or more for each group at each floor of the building.

Eric said that he escaped from the place during a police and immigration raid, which was held a few days ago.

He added that he was able to get his passport back and took one handphone at the premises where he worked before leaving for the airport.

Eric explained that he managed to contact his friend to ask him to book a flight for him from Cambodia to Kuala Lumpur.

He arrived in Kuala Lumpur on September 24 and was received by Phoong at the airport. The latter paid for his lodging there and his flight to Sabah.

Meanwhile, Phoong, who arrived with Eric from Kuala Lumpur said that after receiving the message from the latter who was asking for help, he immediately contacted Eric’s family and asked them to lodge a police report and request the Interpol (The International Criminal Police Organization) to interfere.

Phoong said that Eric was using a Cambodian number starting with 855.

He added that he also reached out to the Ministry of Foreign Affairs as well as to the Malaysia consulate office in Cambodia.

Phoong also said that he again received a text message from Eric on September 19 who informed him that there was a police raid and a lot of people were running.

“I asked him to report to the police but he has a trust issue. I don’t blame him. He cannot trust anyone. I told the consulate office and Wisma Putra about the local authority’s operation which was from September 19 to 24. Eric managed to escape on the 24th,” he said.

Phoong said that this was the first of such cases involving a Sabahan that was received by his office.

“I had asked him to give me more information about his parents so that he can start liaising from there … he gave me his aunt’s number,” said Phoong.

He added that Eric’s aunt made the police report with the help of DAP liaison officer.

When Eric returned to Malaysia, Phoong urged him to share his story with other Sabahans because it was unheard of in Sabah.

“I persuaded him to do a press conference and urge other Sabahans not to fall into the trap. We have heard so many stories from Peninsular Malaysia but not locally in Sabah,” he said. — Borneo Post