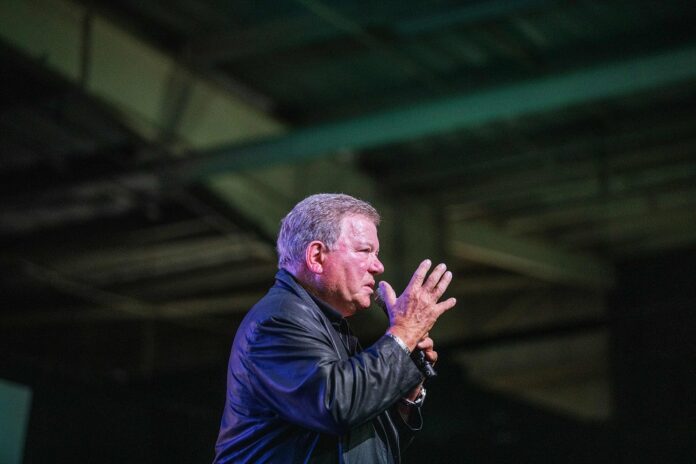 On October 12, William Shatner is set to become the first member of the iconic show’s cast to journey to the final frontier, as a guest aboard a Blue Origin suborbital rocket. — AFP pic

WASHINGTON, Oct 10 — When Star Trek first aired in 1966, America was still three years away from putting people on the Moon and the idea that people could one day live and work in space seemed like a fantasy.

On October 12, William Shatner — Captain James T. Kirk to Trekkies — is set to become the first member of the iconic show’s cast to journey to the final frontier, as a guest aboard a Blue Origin suborbital rocket.

For fans, the 10-minute hop from a West Texas base back to Earth will be a fitting coda for a pop culture phenomenon that inspired generations of astronauts.

“I plan to be looking out the window with my nose pressed against the window, the only thing that I don’t want to see is a little gremlin looking back at me,” the 90-year-old Canadian, who will become the oldest person ever to go to space, joked in a video release.

Blue Origin’s decision to invite one of the most recognisable galaxy-faring characters from science fiction for its second crewed flight has helped maintain excitement around the nascent space tourism sector, as the novelty starts to wear off.

This summer saw flamboyant British entrepreneur Richard Branson fly just beyond the atmosphere in a Virgin Galactic vessel on July 9, beating the Amazon founder Jeff Bezos by a few days in their battle of the billionaire space barons.

Elon Musk’s SpaceX sent four private astronauts to orbit the Earth for three days as part of the Inspiration4 mission in September, which raised more than US$200 million (RM836 million) for charity.

“Bringing on a celebrity like William Shatner, who’s related to space, brings a kind of renewed novelty, and creates media and cultural attention,” Joe Czabovsky, an expert in public relations at the University of North Carolina at Chapel Hill told AFP.

The original Star Trek was cancelled after only three seasons, but went on to spawn more than a dozen movies and several spin-off series, including some that are ongoing.

Shatner, as the plucky and decisive Kirk, commanded the USS Enterprise on a five-year-mission “to explore strange new worlds, to seek out new life and new civilizations, to boldly go where no man has gone before.”

His actual voyage to space will be far shorter, taking the crew just beyond the Karman line, 62 miles (100 kilometers) high, where they will experience four minutes of weightlessness and gaze out at the curvature of the planet.

Star Trek turned American attention to the stars as the US space program was in its offing, landing a man on the Moon towards the end of its run in 1969.

It broke ground by tackling complicated moral questions, and was notable for its diverse cast at a time when the country was struggling through the Civil Rights era.

The Enterprise crew included an Asian-American helmsman, a half-human half-Vulcan science officer, and a Russian-born ensign.

Shatner made history in 1968 when he kissed Black co-star Nichelle Nichols, who played Lieutenant Nyota Uhura, in the first interracial kiss on American television.

The show is also closely intertwined with the US space program.

In 1976 the first Space Shuttle was named “Enterprise” following a letter writing campaign by fans that swayed then-president Gerald Ford.

Nasa hired Nichols in the 1970s to help recruit new astronauts, and numerous other cast members have voiced official documentaries or given talks for the agency.

Astronauts have returned the favor, posing in Star Trek uniforms for mission-related posters and embracing the show’s motifs.

“For 50 years, Star Trek has inspired generations of scientists, engineers, and even astronauts,” Nasa astronaut Victor Glover said in a 2016 video that drew parallels between research on the Enterprise and the scientific instruments on the ISS today.

Another mega-fan: Bezos himself.

Amazon’s Alexa was said to be inspired by the conversational computer in Star Trek, and Bezos — wearing heavy makeup sporting an egg-shaped head — appeared in a cameo in the 2016 film Star Trek Beyond.

Shatner’s star power and wit — he joked to CNN’s Anderson Cooper that the New Shepard rocket, which has been mocked for its phallic appearance, was in fact “inseminating the space program” — could provide a welcome distraction for Blue Origin.

The company is under a cloud of allegations, made by a former senior employee, about a “toxic” work culture with rampant sexual harassment and decision making that prioritized speed over safety.

Blue Origin denied the claims and said the employee was sacked two years ago for issues involving US export control regulations. — AFP

Facebook
Twitter
Pinterest
WhatsApp
Previous articleFiji to reopen for tourism as it hits vaccine milestone
Next articleAzalina: Parliament should pass independent Children’s Commission Act for group to get proper protection