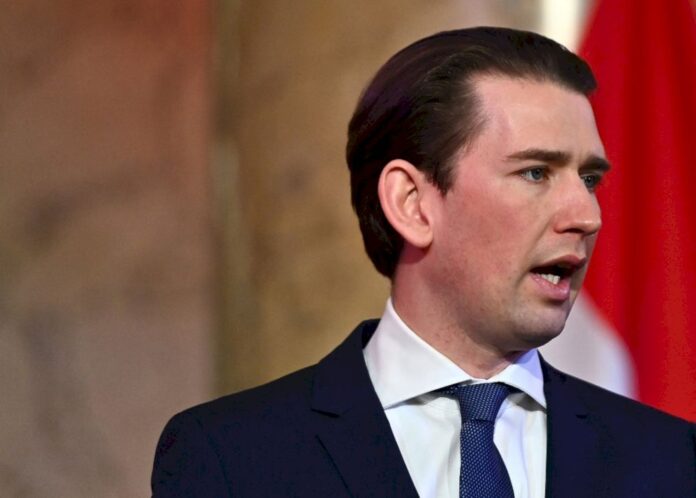 In this file photo taken on April 19, 2021 Austrian Chancellor Sebastian Kurz speaks during a press conference prior to a coaltion meeting at Hofburg palace in Vienna. — AFP pic

Kurz stepped down a week ago at the behest of his junior coalition partner, the Greens, after prosecutors placed him and nine others under investigation on suspicion of breach of trust, corruption and bribery.

Schallenberg, also a member of Kurz’s conservative OVP party, launched a media blitz over the weekend, giving interviews to 13 newspapers and saying he wanted to repair the shattered trust between the OVP and the Greens and to continue to govern until the next general election, due by 2024.

Kurz, who denies wrongdoing, remains leader of his conservative OVP party and is now also its top lawmaker in parliament. Opponents have said he will continue to control policy from those positions.

“In the long term, the cooperation (in the coalition) will only work if we rebuild basic trust,” Schallenberg told Der Standard and Kleine Zeitung. “It has to be assumed that everything will not go smoothly, that there will be other voices as well.

“But if the main players agree, it can work out. We have a substantial government program. We are all on thin ice. This must be clear to all of us.”

The former foreign secretary, who was sworn in as chancellor on Monday, proposed a private get-together for the entire government, where he would “act as a mediator to get into calmer waters,” he told Salzburger Nachrichten.

Still there remained “wounds” between the OVP and the Greens, he told Kronen Zeitung, and rebuilding trust would not happen overnight.

Schallenberg said there was no agreement “whatsoever” with Kurz to stand aside after the inquiry is completed.

“I will hold this office until the next election to the National Council,” Schallenberg told Wiener Zeitung.

Asked who would have the last word on policy, himself or Kurz, Schallenberg said he had been sworn in as chancellor and would carry out its duties.

Still, Schallenberg said he believed Kurz would be the party’s main candidate at the next election.

“I assume so,” Schallenberg told Wiener Zeitung. “I came to the chancellery in an emergency. My goal is to bring stability back.” – Reuters