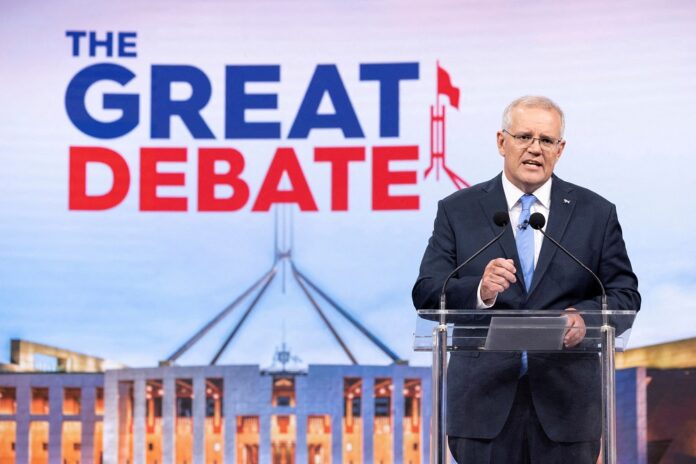 Australian Prime Minister Scott Morrison speaks during the second leaders’ debate of the 2022 federal election campaign at the Nine studio in Sydney, Australia May 8, 2022. ― Alex Ellinghausen/Pool via Reuters

SYDNEY, May 14 ― Australian Prime Minister Scott Morrison promised today to be more empathetic if he wins re-election, as his government continues to trail the opposition Labour Party a week before a general election.

Australians go to the voting booths on May 21, with recent polls showing Morrison’s Liberal-National coalition on track to lose to centre-left Labour, ending nine years of conservative government.

Morrison, whose standing with voters has plunged since mid-2020, acknowledged on Friday being a “bulldozer” but said he would change after the election.

He continued that theme today, telling reporters on the campaign trail in Melbourne that what mattered most as prime minister was to “get the job done”, but promising to “explain my motives and my concerns and empathise a lot more” in the future.

Among criticisms of Morrison in his time in office have been his handling of bushfires that killed 24 people and left thousands homeless, and his response to shortfalls of Covid-19 vaccines and then rapid antigen tests.

Asked why he had waited until the final week of the campaign to tell voters he would change, Morrison said: “I have been listening carefully to people”.

Labour leader Anthony Albanese campaigned today in Darwin where he announced that, if elected, he would spend A$750 million (RM2.3 billion) to strengthen Australia’s universal healthcare scheme.

Labour promises a “Strengthening Medicare Fund” to boost the scheme and address what it claimed was a crisis in care provided by general practitioners across the country.

The party sees its protection of Australia’s cherished Medicare system as a key differentiator between it and the government, which has campaigned strongly on claims of superior economic management and national security. ― Reuters