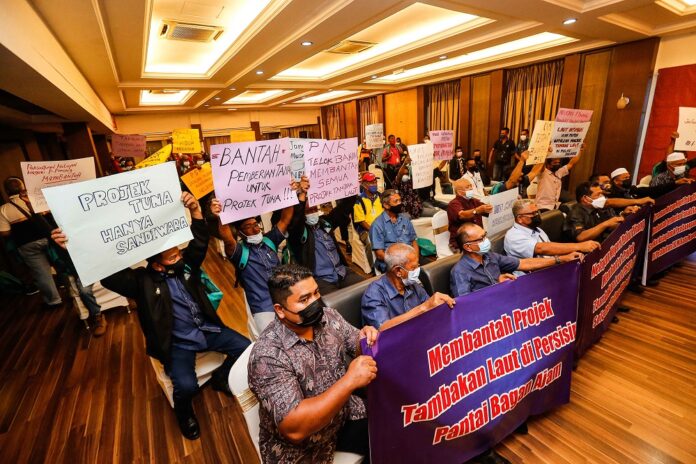 GEORGE TOWN, Nov 25 — The Penang Fishermen’s Association (Pen Mutiara) received unanimous support from its members at its annual general meeting (AGM) today to object against two massive reclamation projects in the island state that could negatively impact their livelihoods.

Pen Mutiara chairman Mahadi Md Rodzi said the full show of support proved its motion was not just the opinion of the committee alone.

“There were claims that only the Pen Mutiara committee is against the PSR and that we are forcing members to oppose the project but today’s AGM proved that the members were not forced or coerced to object against the project,” he told a press conference after the AGM concluded at around 12.30pm.

The motion tabled in the AGM was to object to the Penang South Reclamation (PSR) project and a RM2 billion reclamation project in Bagan Ajam in Seberang Perai Utara.

All Pen Mutiara members, who attended the AGM, also held up placards to show their objection against the reclamation project after the meeting.

The PSR is an ambitious endeavour to create three islands measuring a total 4,500 acres (1,821 ha) in land size off the coast from Permatang Damar Laut.

The PSR project was first introduced back in 2015 as the funding module of the RM46 billion Penang Transport Master Plan (PTMP) after SRS Consortium was appointed as the project delivery partner (PDP) for the PTMP on August 14, 2015.

The reclamation project in Seberang Perai Utara stretches from Bagan Ajam to Telok Air Tawar to get 407ha of land from the sea.

The project is undertaken by Rayston Consortium (Butterworth) Sdn Bhd (RCSB) and the environmental impact assessment (EIA) of the project is still pending approval from the Department of Environment.

On an unrelated issue, Mahadi said the AGM has also approved another motion to officially object against a private company from taking over the 2.8-hectare- (seven-acre) Fisheries Development Authority Malaysia (LKIM) jetty and its adjoining land in Batu Maung.

“There was a proposal by a private company to take over the whole seven acres of land from LKIM to develop it for a mixed-development project on the pretext of upgrading and managing the tuna landing port,” he said.

He said they are not against the jetty being used as a tuna landing port but they are objecting to the land being taken over by a private entity for a development project that has nothing to do with the tuna landing port.

“We have sent a letter to the Agriculture and Food Industries expressing our opposition to this proposal,” he said.