ASMR curious? Then this is the exhibition for you (VIDEO) 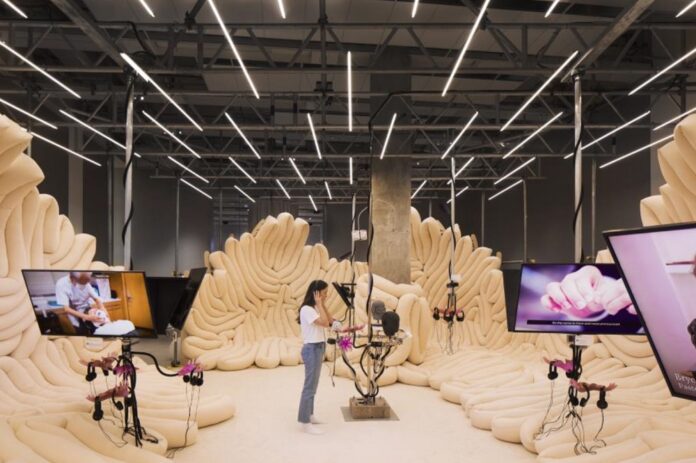 The ‘Weird Sensation Feels Good’ exhibition immerses visitors in the history of ASMR through a series of 40 audio, visual and tactile works. — Picture courtesy of The Design Museum

LONDON, May 14 — Some love it, some loathe it. But while ASMR has been a major trend on the internet for the last decade, this relaxation method has rarely been the subject of a full-blown exhibition. Now, the concept is being explored in a show called “Weird Sensation Feels Good” at the Design Museum in London.

ASMR is an acronym that stands for Autonomous Sensory Meridian Response. These rather complicated terms refer to a trend that emerged on the internet in the early 2010s. It essentially involves YouTubers filming themselves producing light or soft sounds, but recorded very closely, so that the viewer has the impression that they’re being made just a few centimetres from their ear.

These videos provoke powerful sensations in some internet users, and annoyance in others. It is this strange phenomenon that the Design Museum is exploring in its exhibition, “Weird Sensation Feels Good” (May 13-October 16, 2022). Visitors will be able to immerse themselves in the history of this psychological oddity through a series of 40 audio, visual and tactile works.

Among them are creations by Tobias Bradford, Julie Rose Bower, Marc Teyssier and Bob Ross. The latter became a hit among the younger generation thanks to the smooth voice with which he presented his show, “The Joy of Painting.” Although the show ran until 1994, Bob Ross’s popularity was revived with the rise of ASMR.

The “Weird Sensation Feels Good” exhibition also features contributions from a dozen content creators specializing in ASMR, commonly called “ASMRtists.” They give their own definition of this phenomenon, which divides internet users and questions scientists. “ASMR injects the internet with softness, kindness, and empathy. As a movement, it allows us to understand another side to the Internet: one that is slow, gentle, and centreed on selfcare,” the exhibition organisers explain.

While the discipline’s devotees say they find it a source of well-being, no scientific study provides certainty regarding the supposed benefits of these videos of people whispering, tapping or even chewing. According to a 2018 study from the University of Sheffield, researchers found a reduction in heart rate and increased relaxation in those who watched ASMR videos. For their part, scientists at Northumbria University observed that such content can be a powerful anti-stress ally… in some people. Specifically, the study, published in the journal Plos One, suggests that “ASMR-experiencers also have greater predisposition for baseline state anxiety, which can be alleviated by watching ASMR videos.” Let’s hope the Design Museum’s “Weird Sensation Feels Good” exhibit in London has the same effect on them.