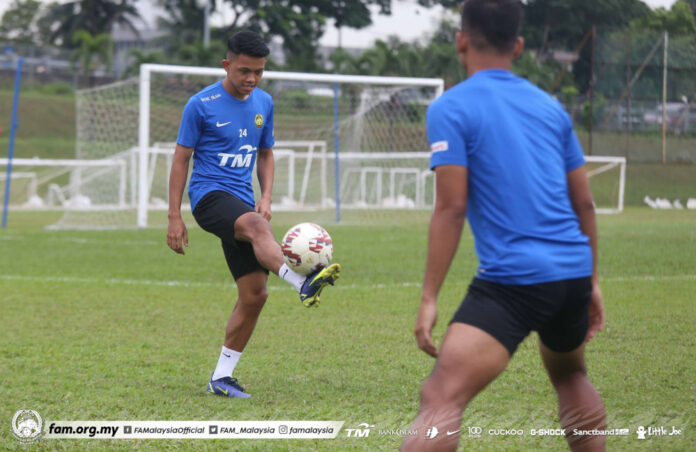 Although Arif Aiman Mohd Hanapi had not been selected due to concerns of fatigue following a packed playing schedule in the M-League previously, Tan Cheng Hoe revealed that the 19-year-old player was instead eager to don the national jersey and play in Singapore. — Picture from Facebook/Football Association of Malaysia

PETALING JAYA, Dec 2 — Although he was dropped from the initial list of 28 players called up for the Harimau Malaya squad central training camp, young Johor Darul Ta’zim (JDT) winger Arif Aiman Mohd Hanapi has finally been tipped to join the national squad for the 2021 Asean Football Federation (AFF) Cup in Singapore this Sunday.

Head coach Tan Cheng Hoe said they decided to call Arif Aiman for the final training session to replace his teammate, Mohamadou Sumareh, who has to attend to family matters and is nursing an injury after appearing in the Malaysia Cup Final against Kuala Lumpur (KL) City FC on Tuesday.

Although Arif Aiman had not been selected due to concerns of fatigue following a packed playing schedule in the Malaysia League (M-League) previously, Cheng Hoe revealed that the 19-year-old player was instead eager to don the national jersey and play in Singapore.

“Before the Malaysia Cup final, I managed to talk to Arif Aiman and he was ready to play for the national squad.

“As a coach, I am very happy to see Arif Aiman as part of our AFF Cup team,” he told reporters during a national squad training session at the PKNS Sports Complex here today.

Cheng Hoe said Muhammad Azri had to forgo the AFF Cup after sustaining a shoulder injury during a recent training session.

The 53-year-old coach was confident that Kalamullah, who he said was a good keeper, could fill the gap left by Muhammad Azri if he is listed in the final list of 24 players.

Cheng Hoe also said the loss of KL City midfielders Akram Mahinan and Kenny Palraj due to injury would pose a challenge for coaches, who would have to rely on available players for the competition in Singapore.

Available players such as Junior Edtsal (Chonburi FC) and Muhammad Syafiq Ahmad (JDT) would be used as coaches were unable to conduct analyses to select new players to replace Akram and Kenny in such a short time, he said, adding that he hoped those selected would rise to the occasion and prove themselves on the field.

Malaysia, the 2010 champions, will begin their Group B campaign against Cambodia on December 6, followed by Laos (December 9), Vietnam (December 12) and Indonesia (December 19) in the hopes of advancing to their second consecutive final. — Bernama