Abg Jo: More aid ahead for seniors as Sarawak addresses ageing population by 2030 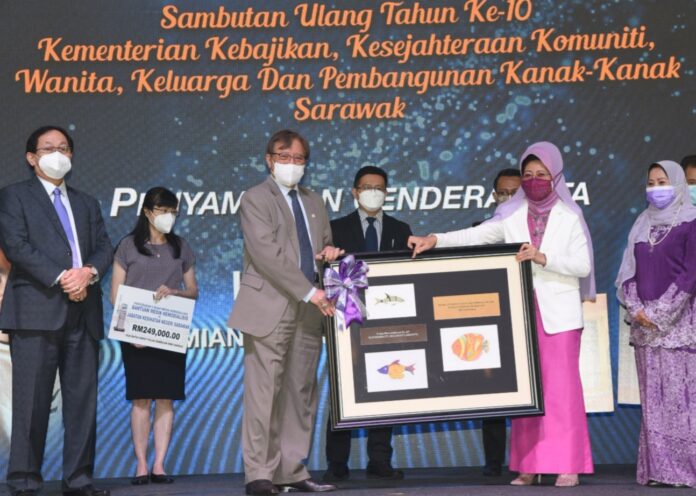 Fatimah presents a memento to Abang Johari. They are flanked by Harden and Rosey. — Photo from Information Department

KUCHING (Oct 6): Sarawak will come up with more forms of assistance for the welfare of senior citizens as the state addresses an ageing population by 2030, said Chief Minister Datuk Patinggi Abang Johari Tun Openg.

He pointed out Department of Statistics’ data showed an increase in senior citizens for Sarawak within the next 10 years, with those aged over 60 expected to increase to between 15 and 20 per cent of the population.

Due to longer lifespans and lower birth rates, he said the government has to change in terms of assistance for senior citizens, who would still be active and energetic after the age of 60.

“This has happened in Japan and now is also happening in China. They call it ageing population. Singapore is also experiencing the same situation, and we are heading to the same direction.

“This means the cost involved will be high. Because of that, Sarawak government is now thinking how to face this situation in terms of funding. Our insurance scheme through the latest instrument has to be formulated so that we always have funds for the cost-of-living expenses of senior citizens.

“Just like in developed countries, despite the longer lifespan, there is attention given by the responsible government. I, as the leader of the state government, want to say we are now studying the best instrument where we can give welfare assistance to the greying population,” he said when officiating at the 10th anniversary celebration of the Ministry of Welfare, Community Well-being, Women, Family and Childhood Development.

Abang Johari said discussions on the matter have been ongoing with the ministry and State Financial Office.

He pointed out that although many of those aged 60 and above now are still active and energetic, by age 70 they may not be working anymore and their savings, including in the Employees Provident Fund (EPF), may be depleted as they reach their 80s.

“We have to face this reality. And we have to have certain instruments where we can give assistance, including financial assistance, to this target group of our population.

“Don’t worry, we are working towards this to face such a situation in 2030 to 2050 – as long as we have the policy, as this policy will be improved as it goes along,” he said.

He also said the ministry is important as Sarawak prepares for the future and cited the Post Covid-19 Development Strategy, which also covers social and welfare aspects for Sarawakians.

He added facilities for senior citizens to take part in healthy activities will also be built in residential areas, including a pilot project at Sungai Bedaun.

“The university will be providing diploma-level and degree-level courses for this,” he said.

She revealed the ministry is working with Universiti Putra Malaysia’s MyAgeing Institute to prepare for an aged nation in terms of formulation of policies, facilities, and services.

She added a digital system called iSarawakCare is expected to be ready next year to facilitate service delivery to clients.