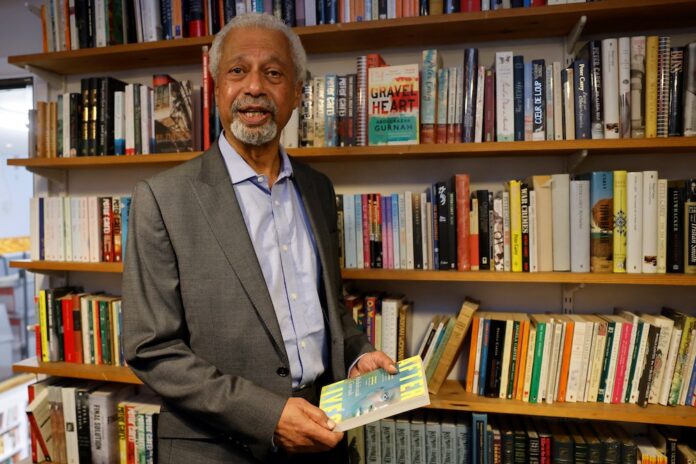 Zanzibar-born author Abdulrazak Gurnah poses for a photo call prior to attending a press conference, after he was awarded the Nobel Prize in Literature, in London October 8, 2021. — AFP pic

LONDON, Oct 10 — Abdulrazak Gurnah, the Tanzanian-born author awarded the Nobel Prize in Literature, forged a critically acclaimed 35-year career rooted in colonialism and immigration after arriving in Britain as a refugee.

The novelist was born on the Indian Ocean island of Zanzibar, off the coast of east Africa, in 1948, and began writing after moving to England as a refugee, where he is now based.

“This is the last thing I would have imagined for myself,” the novelist said on Thursday after discovering that he had won the prize.

“I am very surprised and humbled, and of course, I’m thrilled and honoured.”

He welcomed the Nobel Prize as sparking greater discussion of the issues he raises in his novels, such as the plight of refugees and colonialism.

“It’s still sinking in that the Academy has chosen to highlight these themes which are present throughout my work. It’s important to address and speak about them,” he said.

When Gurnah, 72, arrived in England, “these words, such as asylum-seeker, were not quite the same”, he said. Now, “more people are struggling and running from terror states”.

“The world is much more violent than it was in the 1960s, so there is now greater pressure on the countries that are safe,” he said, stressing that “we must deal with these issues in the most kind way”.

In an interview with the Nobel Foundation, he urged Europe to see African refugees as people with “something to give”.

He stressed he retains his links with Tanzania.

“Yes, my family is still alive, my family still lives there,” he told AFP.

“I go there when I can. I’m still connected there… I am from there. In my mind I live there.”

Gurnah started writing in his first few years of living in England at around the age of 21, arriving in the country after members of Zanzibar’s Arab minority were persecuted in the wake of the country’s 1964 revolution, according to the Guardian.

“In a sense it was something I stumbled into rather than the fulfilment of a plan,” he told the newspaper in a 2004 interview.

“In a larger part, it was to do with the overwhelming feeling of strangeness and difference I felt there,” he said.

But it was almost another 20 years before he released his debut novel, Memory of Departure, in 1987. Pilgrims Way followed a year later, and Dottie in 1990.

All three explored the experiences of immigrants in contemporary Britain, including racism and identity.

In the intervening time, after two years at Bayero University Kano in Nigeria, he came back to Britain and obtained his PhD in 1982 at the University of Kent, where he worked until his retirement.

Critical recognition for his novels came with his fourth book, Paradise (1994), which was set in colonial east Africa during World War I.

It earned him a place on the shortlist of the prestigious Booker Prize for Fiction, although he lost out to the Scottish author James Kelman.

Gurnah’s 1996 work Admiring Silence recounts the tale of a young man who returns to Zanzibar 20 years after leaving for England, where he married an Englishwoman and worked as a teacher.

Academic Luca Prono said Gurnah’s works were “dominated by the issues of identity and displacement and how these are shaped by the legacies of colonialism and slavery.

“Gurnah’s narratives are all premised on the shattering impact that migration to a new geographical and social context has for his character’s identities,” he wrote on the British Council’s website.

In 2001’s By the Sea, Gurnah follows Saleh Omar, an old asylum-seeker who has just arrived in Britain.

His latest novels include 2005’s Desertion, which was shortlisted for the 2006 Commonwealth Writers Prize, and The Last Gift (2011).

Publishers Weekly described the latter as a “haunting novel” containing “a strong plot with powerful musings on mortality, the weight of memory, and the struggle to establish a postcolonial identity”.

Gurnah, who lives in Brighton, on England’s south coast, released Gravel Heart in 2017, which his publisher Bloomsbury called a “powerful story of exile, migration and betrayal”.

His latest novel, Afterlives, was released last year and tells the story of a young boy who was sold to German colonial troops.

“An unending exploration driven by intellectual passion is present in all his books, and equally prominent now, in Afterlives, as when he began writing as a 21-year-old refugee,” Nobel Committee chairman Anders Olsson said.

Gurnah edited The Cambridge Companion to Salman Rushdie in 2007, and retired as a Professor of English and Postcolonial Literatures in 2017. — AFP